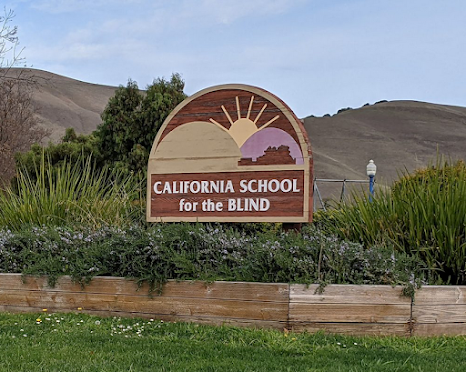 On the way home, I drove past the California School for the Blind in my hometown of Fremont. I’ve read that monkeypox can cause blindness if lesions reach and scar the cornea.

If this pandemic is anywhere near as bad as I think it can be, how many parents will be enrolling their children at this school this coming school year?

Went to Food Maxx today. On my way to the entrance, I walked past an employee: a tall, stocky, light-skinned Latino in his teens. Looked like he was going to fetch errant shopping carts in the parking lot. Figured it might be his first job, or definitely one of his first jobs. Made me think of my son and when he’d have his first job. For the life of me, I can’t imagine it. Simply can’t. Not sure if it’s because I can’t imagine him making it to that age or that I can’t imagine myself being alive to see him at that age. Or maybe both of us won’t make it to that year? I don’t know.

I was asleep in my son’s bed when you started pawing at our gate. I heard the lock rattle and clang against the gate latch. At first, in my fuzzy-headed state, I thought it was a cat prowling along our fence, but the rattling was too loud, so I got out of bed and stumbled through our dark bedroom. It was two-thirty in the morning. Was someone trying to break into our backyard? I grabbed a flashlight, then tiptoed past our kitchen to the backdoor. A window by the door was cracked open and that’s when I heard you, panting on the other side of the door. Oh, shit, I said aloud as my eyes flung open like a pair of roller blinds. I immediately knew it was you. I knew you had snuck into our backyard. 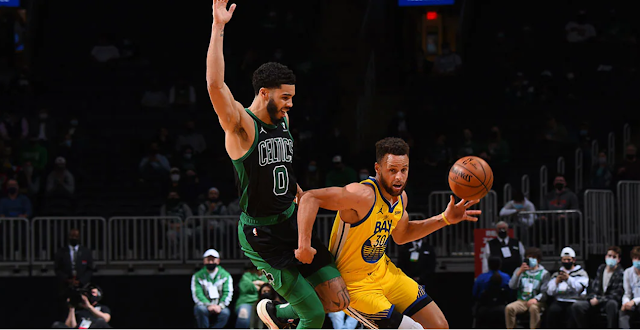 Well, holy shit: my beloved Warriors are back in the Finals, four wins away from winning another chip. It’s wild. We’ve been so unbelievably spoiled: 6 Finals appearances in 8 seasons! We may never see an NBA team go on a run like this again.

At the beginning of the season, I was cautiously optimistic about my Warriors. I thought our ceiling was nabbing a #3 to #6 seed in the depleted Western Conference with the Nuggets and Clippers both mired with injuries to a few of their star players. After we beat the Lakers in the season opener, I was all smiles because it never ever gets old beating the fucking Lakers or LeBron. At the time, most of us thought the Lakers would be title contenders, so I thought, one freaking game into the season, that finishing with a #3 to #6 seed was totally plausible. Back then, I thought a Western Conference Finals run, if lots of things went right, was in play, but I realistically didn’t think we’d be back in the Finals this season. I guess I wasn’t sure if we’d ever make it back to the Finals with Steph and Draymond aging and Klay coming back from two catastrophic injuries on the wrong side of thirty.

So making it back is unbelievably sweet. Reminds me of that charmed feeling I felt when this championship core made their first Finals appearance back in 2015.

The Warriors are a different team now. Back then, Steph, Klay, and Draymond were the youngsters trying to prove to themselves that they could be champions. Now we’re like the last Spurs title teams: the cagey, veteran team with abundant experience and championship poise you can’t fake. Now we’re trying to reclaim title glory, perhaps for a final time, while desperately trying to fend off a young, hungry, battle-tested, and supremely talented team.

A Fan’s Notes: Two Games into the Warriors 2022 Playoff Run 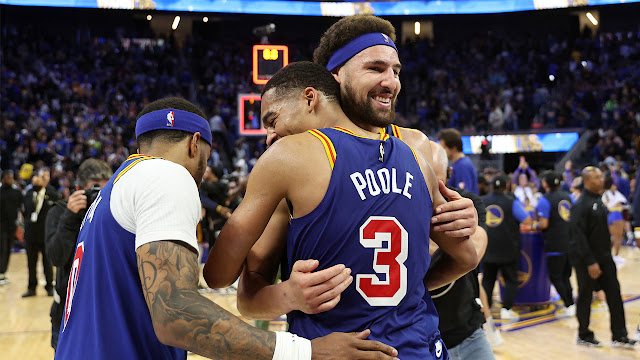 This season has been such a wild ride with exalted highs and depressing lows and it feels like this team might be cresting to its peak, good lord. After cruising to a dominant 126-106 win in Game 2 of our series against the depleted Nuggets, us Warriors fans are riding high again. The 2022 iteration of our hallowed Death Lineup is running the hapless Nuggets off the court. Before this series began, I, like many others, cautiously but pragmatically picked the Dubs to win in 6, but right now it’s looking like a gentleman’s sweep at most. There’s no reason we can’t whip out the brooms on the Nuggets. When Steph, Poole, Klay, Wiggins, and Draymond hit the court and go Voltron against Denver, poor Nikola Jokić—probable two-time NBA MVP Nikola Jokić!—looks like Timofey Mozgov in the 2015 NBA Finals.

The Nuggets are done. They have no counter. With injuries to their second and third-best players, they lack the personnel to make a move to stymie these 2022 Warriors. Our path to a fourth championship with our aging core is to play the least number of playoff games possible so we’re not putting any additional and unnecessary mileage on Steph, Klay, Draymond, and Iggy so we need to not fuck around and finish these Nuggets off.

After a 33-32 first quarter against the Timberwolves, the Memphis Grizzlies took command and responded in Game 2 after stunningly losing their home opener. The Grizzlies are still the only team in the Western Conference I fear. I’ve seen Steph, Poole, Klay, Wiggins, and Draymond lay waste to the undermanned Nuggets, but I badly want to see that lineup pitted against stronger opposition, like the Grizz and the Suns. In 11 minutes of action, they have a preposterous offensive rating of 204.3 (meaning they would score 204 points in 100 possessions) with a defensive rating of 75.0: 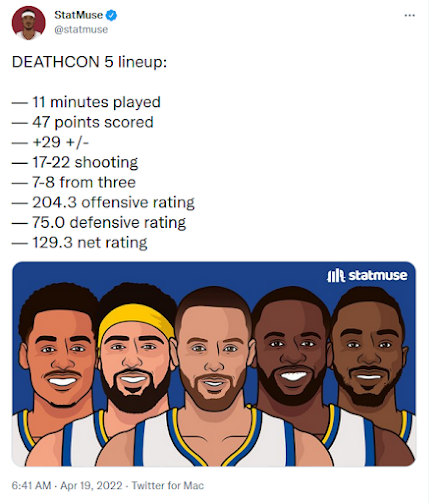 With Klay’s shooting basically back to classic Klay form, Steph already looking like himself in his second game back from injury (32 points in just 23 minutes in Game 2!), Draymond being Draymond, Jordan Poole looking like Monta Ellis if Steph had mentored him, and Wiggins—a former #1 overall pick—capably filling into the last spot, any team in the league is gonna have big problems trying to stop this five-man lineup. Memphis and Phoenix have the depth and talent to try to counter, but no team has had the unenviable task of trying to cover Steph, a Steph-like clone (in Poole), and one of the greatest NBA shooters of all time. Yeah, good fucking luck with that.

The 64-win Suns just dropped Game 2 to the Pelicans, who squeaked into the playoffs courtesy of the NBA’s still-new play-in format, and a realistic path back to the Finals is looking better and better for the Dubs. I think the Grizz will prevail against the Wolves, and I think there’s no way the Warriors lose to the Suns if we get past the Grizzlies. Before the playoffs started, I had no fear of the Suns; less so now. If we’re mostly healthy, I think we can knock them off in a gentleman’s sweep. No disrespect meant to the Suns, but we’re a bad matchup for them. And man, it would be outrageously sweet to send CP3 packing so deep into the playoffs! Might very well be the last time he comes so close to winning a chip.

I don’t want to get ahead of myself and look east to see how the playoff action might turn out there. We’ve still got a lot of games to play. 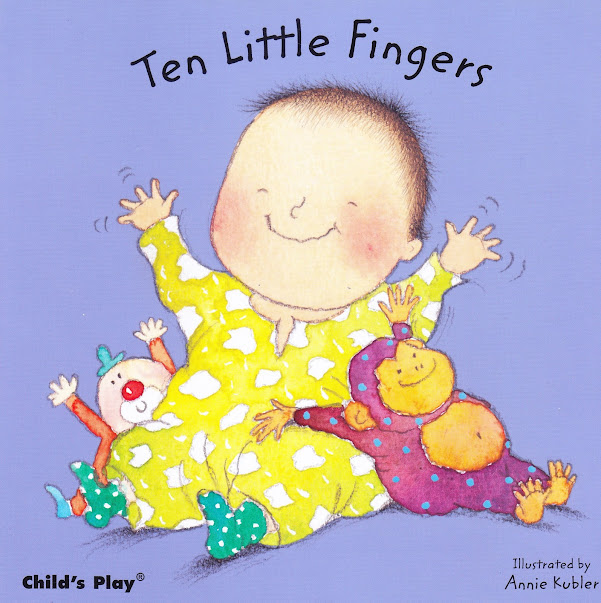 In 2017, my wife, Maria and I welcomed our rainbow baby, Miguel, into this world. It would also serve as an introduction into the world of children’s books, particularly board books and picture books.

Maria and I are lifelong readers. Not surprisingly, we’re picky about our reading material, including children’s books. I have found that we’re both sensitive to language and a book’s illustration style. We’ll pass on a book if either element is lackluster.

As a parent, especially when your child becomes attached to a book, you will read it over and over and over and over again so my favorite children’s books have to be ones that are not nauseating to read. (It’s okay if one or two parts of a book are a bit cheesy, if you’re asking me.) They must also be aesthetically pleasing. And since you’ll read them, night after night after night, my favoritest children’s books tend to provide teeny visual details to point out and remark upon to enrich the reading experience, or have a number of characters that lends itself to reading them in playful voices. For me, it’s all about finding different wrinkles to keep the readings from becoming stale.

Without further ado, here’s my top-10 list in chronological order from Miguelito’s infanthood to his present surly toddlerdom:

Eric Feigl-Ding, an epidemiologist and health economist and a Senior Fellow at the Federation of American Scientists in Washington DC tweeted this image: 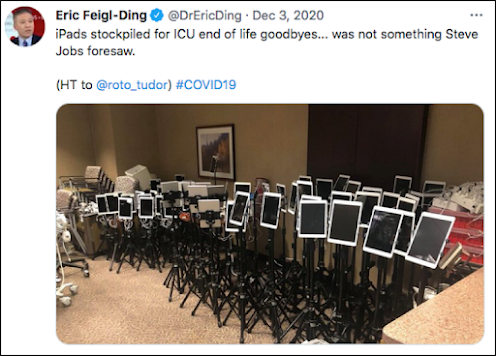 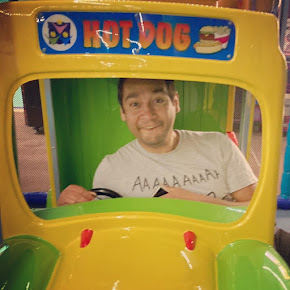 Juan
Juan Alvarado Valdivia is the author of ¡Cancerlandia!: A Memoir, which received Honorable Mention for the 2016 International Latino Book Award for Best Biography in English and was listed as a Top 10 Best Nonfiction Book for 2015 on TheLatinoAuthor.com. His short story collection, Ballad of a Slopsucker, was a 2020 International Latino Book Award finalist for Best Collection of Short Stories – English or Bilingual, and was chosen as Best Short Story Collection for the 2019 Latinidad List. His fiction, nonfiction, and music writing have been published in The Acentos Review, The Bay Bridged, Black Heart Magazine, BorderSenses Literary Magazine, The Cortland Review, Label Me Latina/o, Mount Hope, Origins Journal, Prairie Schooner, Somos en escrito, and Thread.