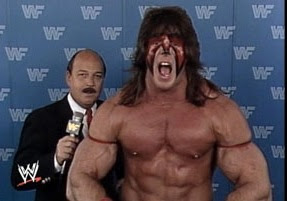 Here's an excerpt from my memoir:

MR. HODGKINS, dressed in his tuxedo, stands next to a balding, mustachioed man, MEAN GENE OKERLUND. They both face a large Panavision television camera. Donning a black suit, holding a microphone, Okerlund stares at the woman wearing a headset. She stands beside the cameraman. Okerlund nods when she points at him. She holds her fingers up in a silent countdown—three, two, one—before the red lamp on top of the camera turns on.

MEAN GENE OKERLUND
We are just minutes away from our career-ending match between “El Loco,” Juan Alvarado Valdivia, and the gentleman standing beside me, death himself, Mr. Hodgkins.

Okerlund takes a step back toward Mr. Hodgkins. He stretches his hand to Mr. Hodgkins as if he is going to put it on his back.

MEAN GENE OKERLUND
Mr. Hodgkins, I’ve got to ask you, just what exactly is it that you have against El Loco? You’ve come into his life and, without exaggeration, turned his world upside-down, casting a dark pall over it. Tell me, why him?

Mean Gene holds the microphone up to Mr. Hodgkins. Hodgkins stares back at the camera with an indifferent expression that Camus would have envied.

MR. HODGKINS
It’s like this, Okerlund. I have nothing personal against the man. We simply crossed paths—and it is my job to ensure that he suffer the consequences. It is nothing more than that. He’s the one who has taken it personally—the flawed, vengeful human that he is. I do not hold that against him. But nevertheless, my objective is to annihilate him. And I will.

Mr. Hodgkins stalks out of camera view. Okerlund watches him leave, then turns back to the camera after a long, dramatic pause.

SEAN MOONEY
All right, thanks Gene. El Loco is in rare form tonight. He’s been pacing this room ever since I got here.

While Mooney stands in front of the camera, Juan—in El Loco gear—paces behind him in front of a black curtain. He pumps his arms and gives an occasional menacing snarl to the camera. Earthy brown and green-colored tassels are tied around his wrists and bronzed biceps. A mask bearing the same colors has been painted on his face. He is wearing a wig—an oversized afro. A sharpened pencil is tangled in it. His arms, chest, and modest paunch are varnished in body oil. They glare beneath the studio lights. Besides the tassels, the only thing he wears are tasseled brown boots and a green Speedo.

SEAN MOONEY
El Loco—I don’t think I’ve ever seen you this amped up before a fight! And you’re always roaring, running full speed into the ring and yanking on those ropes as though a lightning bolt were coursing through your veins.

EL LOCO
Well what can ya expect, Mooney. This is the fight of my life!

He shoves Mooney back, snarling at the camera.

EL LOCO
Of course I’m pumped up! This is it—this is fucking it for me or that punk, Mr. Hodgkins. Well no one gets to take my life except me!

Juan’s mouth drops. His brows furrow. He looks away, ashamed to have stumbled upon this truth before a live television broadcast.

He turns back to the camera, shaking his head violently as if he were trying to wake from a daze. Mooney leans his head back frightfully. He holds the microphone out to El Loco as he points at the camera.

Juan turns his back to the camera. He cranes his head back and lifts his clenched fists up high. He roars, then punctuates it with a gorilla-like pounding of his chest.

EL LOCO
Just take a look at my trunks. It says it all, right there, baby.

Juan cackles. He pumps his arms. The camera zooms down to the green tights covering his butt. Mr. Hodgkins’ head, with his signature derby hat atop, is stitched on it. Below it reads: Your Ass is Mine!

El Loco cranes his head back to roar before he dashes out of the room.