On Ray Manzarek and Robby Krieger

Look at me mama, doing my first response blog piece! This ditty is in response to my homeboy, Justin Goldman’s piece on Ray Manzarek that you can check out aqui on his kick-ass blog.

It’s safe to say that when most people think of The Doors, the fleeting image that first comes to mind is Jim Morrison: The Lizard King; the white-boy shamanic, baritone-voiced, dead-in-a-bathtub-in-the-city-of-cities-at-the-age-of-27 lead singer who now lives eternally through the recordings this band left us (“We had some good times/but they’re gone”). But when I think of The Doors, I think of great music to get high to. Or music that makes you feel like you’ve shared a spliff with The Old Fart Upstairs ("Cancel my subscription to the resurrection / Send my credentials to the house of detention"). And the primary culprits for this sensation are the recently departed Ray Manzarek, and guitarist Robby Krieger—one of my favorite duos in all music. (The only other guitarist whose playing makes me feel like I’ve hit a four-foot bong in Santa Barbara is Jimi Hendrix.)

Though I’m no groupie with pictures and posters of Las Puertas all up on my walls (I’ve always enjoyed calling “The Doors” by their exact Spanish translation, though my Peruvian posse always call them “The Doors” with a cute accent), this is my favorite picture of yet another monumental band from Los Angeles. 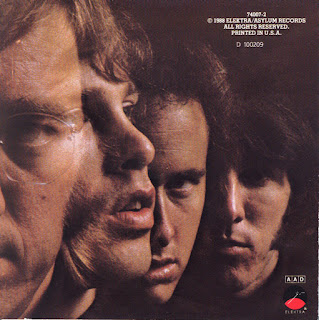 In this photo, Manzarek is the one who commands the viewer’s initial attention. Those studious-looking glasses, those piercing eyes. What is this bookworm doing in a rock band? He should be a professor, right? But in a way, I think it can be easily argued that he occupied a similar position within The Doors. While everyone focused on Jimbo’s onstage antics, his dreamy-hot looks, or Krieger’s solos and phenomenally-diverse chops, Manzarek was The Wizard of Oz for that band. He provided the foundation for the sonic tapestry that allowed those two to reach peaks that captured their listeners. When Manzarek passed away over two weeks ago, the other member of their rhythm foundation, drummer John Densmore, said via Twitter: “There was no keyboard player on the planet more appropriate to support Jim Morrison’s words…. It was like we were of one mind, holding down the foundation for Robby and Jim to float on top of….” And as we’re finding out here in the San Francisco Bay Area, you can’t build a pretty and stable bridge without some sturdy bolts and mighty pillars to hold that baby up.

Like my buddy Justin said in his blog post, “People won’t dress up as Manzarek for Halloween.” And they won’t dress up like John Densmore or Robby Krieger with his forehead made for Happy-Gilmore-style headbutting. But yet, those two, Manzarek and Krieger, are why I continue to listen to The Doors now that I’ve mostly outgrown my hard-boozing, Morrison-felt-the-pain-I-feel phase. Manzarek and Krieger—forgive me for bringing ice skating into this (I didn’t know this was going to happen when I started to put my fingers to keyboard, believe me)—were like a pair of lyrical figure skaters who deftly painted musical tapestries of many shades and graduations. (Just think of the range encompassed within “Roadhouse Blues,” “Alabama Song,” “Strange Days,” “L.A. Woman,” and “Not to Touch the Earth.”) Think of Krieger’s slide guitar solo on “Moonlight Drive” and Manzarek’s subdued chords layered behind it. Let’s stay on “Strange Days”—my favorite Doors album; listen to the underrated “My Eyes Have Seen You” and the way that 2:30 song just continually builds on a simple but mildly frenetic riff from Krieger’s Gibson SG; the way Manzarek and Densmore build the song up to a peak for Morrison and Krieger to take the song out on. Listen to “Love Street”—how beautifully Manzarek and Krieger play simple piano and guitar melodies to conjure this idyllic soundtrack to accompany Morrison’s lyrics. Listen to their organ and guitar solos on “Light My Fire.” Or one of my favorite tiny moments—all twenty seconds of it—on their epic “When the Music's Over.” It’s that part from the 5:47-6:06 mark where Manzarek’s organ and a few atmospheric notes from Krieger’s guitar produce a sound that sounds like the “scream of the butterfly.”

I could go on and on.

These two, along with Densmore’s underrated drumming and The Lizard King, were one of those once-in-a-lifetime kind of bands. (And you can thank transcendental meditation for it!)

People may not dress like the three non-supernovas in The Doors, but their music will always live on—as long as our iPods and computers will have enough juice to play.
Posted by Juan at 4:08 PM

Email ThisBlogThis!Share to TwitterShare to FacebookShare to Pinterest
Labels: John Densmore, My Eyes Have Seen You, Ray Manzarek's death, Robby Krieger, When the Music's Over