February 5th, late Friday evening, the tiny United passenger plane I rode from Denver, CO landed on the small airport runway in Laramie, WY. It was my first time in The Equality or Cowboy State, only my second time in the Mountain Standard Zone. (My heart still aches for you, New Mexico!) The following morning, I contracted the services of the good people at Snowy Range Taxi to take me west from Laramie past Saratoga, the nearest town from the artist camp that I will call home for most of this month.

On my two-hour cab ride to the Brush Creek Ranch, and from conversations with locals and others who have passed through Wyoming before, I’ve learned a thing or two about the 44th state admitted into the American Union:


•    Besides maybe the Uruguayan cab driver who heartedly patted my thigh and wished me well on bagging his fellow countrywomen in Montevideo, Chantelle Brawley of the Snowy Range Taxi Company in Laramie is—without a doubt—the coolest cab driver I have ever met. (And she’s driven a car in 95 mph winds in Wyoming.)

•    Though it seemed akin to science fiction for my Californian-living ass, it can get down to -50 Fahrenheit here in Wyoming—with winds up to 95 mph. Not exactly picnic weather.

•    While we drove out on Highway 80 from Laramie, which has a population a shade over 30,000, I asked Chantelle if we will pass any towns on the way to Saratoga. No, she said. Then she told me that Wyoming is often referred to as “The Hundred Mile State” because there’s typically one hundred miles between major cities.

•    Speaking of cities, Cheyenne, the state capital, is the largest in Wyoming. According to the U.S Census Bureau, in 2014 Cheyenne had an estimated population of only 62,845.

•    Chantelle told me Wyoming’s population of cattle is larger than humans. A few days later, I asked the assistant director of our arts foundation if this is true. She said that sounds about right.

•    Beverly, one of my fellow kindred artist spirits here at Brush Creek, told me that Wyoming was the first state to grant women the right to vote. And she’s right: on December 10, 1869, “lawmakers in Wyoming first territorial legislature passed a bill allowing women the right to vote” according to WyoHistory.org, a project of the Wyoming State Historical Society.

•    According to Elizabeth, a kind-hearted photographer at our camp, it is much windier in Wyoming than her home state of Montana. We suspect it’s because this corner of Wyoming is much flatter, tucked between various mountain ranges such as the Laramie Mountains and Medicine Bow Mountains (a.k.a the Snowy Range Mountains).

•    According to our assistant director, Bennett Peak is home to the largest population of cougars in continental American. And it’s nearby.

•    According to Chantelle, the University of Wyoming runs the town of Laramie. Thusly, they offer a generous array of free cab services to local residents at night. To boot, there is a free cab service that boozed-up residents can call to avoid driving drunk.

•    …which is partly why I ordered a slice of pepperoni. And let me tell you, it was excellent. Honestly, with the exception of Bleecker Street Pizza in the West Village, it was the best late-night slice of pizza I’ve ever had. Didn’t expect that from a small town in Wyoming but this trip has presented several surprises.

•    On the topic of surprises, believe it or not, there is a large indoor basketball gym in the Middle of Nowhere, WY (specifically fifteen miles south of Saratoga)—and I had it all to myself! You ask how I pulled this off? Sure let me tell you!

For Super Bowl Sunday, I was the only artist who expressed any interest in watching the game. Since I couldn’t just stroll into the nearest town, the director of the artist foundation was kind and generous enough to arrange for me to watch the game at the “Sports Center” up at Brush Creek Ranch. The ranch did not have any guests so I had this spacious recreation room to myself along with a huge flat-screen TV to show the game. Next door, though, was a basketball gymnasium with six baskets. Off in the corner, they had three racks full of basketballs just beckoning to be bounced and lofted into the air.

While many across this nation witnessed a piss-poor halftime show, I flicked the lights on in the gym and shot some balls and drove for some slow-mo layups in my snow boots. Couldn’t have ever predicted that my life would present that opportunity, but I took it. It was one of the highlights of this residency.

•    Another highlight: seeing a snowshoe hare hop across a snowy plain as the sun descends over a snow-capped range in the distance.

•    From what I’ve seen in Laramie and Saratoga, it is not unusual to see an assortment of dead taxidermied animals in stores in Wyoming. Even a grocery store.

At Valley Foods and Liquor in Saratoga, I saw a standing bear encased in a glass box, couple of turkeys, several deer heads (as you can see) and even a taxidermied lion. Not a mountain lion—an African lion. It's just laying atop a shelf near the frozen section. (Make of that what you will.)

I counted 37 dead taxidermied animals in the supermarket. And I think there are a few more deer heads in the liquor store connected to it.

Also, it is not uncommon to see their stockers wearing camouflage gear. (Make of that what you will.)

•    There are no Apple or Trader Joe's stores in Wyoming.

•    There are no pigeons in Wyoming, but they do have bald eagles and huge crows.

•    I can now say I have seen two crows hang-gliding in place within swirling +50 mile per hour winds off of Highway 80.

•    It is not uncommon to see big rigs jackknife from heavy winds on Highway 80 between Laramie and Saratoga. On our drive out to Brush Creek Ranch on Saturday morning, February 6th, Chantelle and I say a big rig violently jackknifed on the grassy bank separating westbound and eastbound traffic. The truck and its trailer looked like an inverted L. Coupled with the blanket of snowflakes we saw skipping and floating across the highway in 50 mph winds, it was terrifying to witness.

•    And further along, we saw another big rig lying trapped in the snow off the side of our highway.

•    On one stretch of Highway 80, a sign flashed to warn all drivers, including big rigs, to reduce their speed to 50 miles per hour due to winds in excess of 50 mph. There were no cars or trucks in front of us for as far as my eyes could see, but a big rig hanging behind us for most of the trip sped past us when Chantelle slowed her Ford Contour. I turned to my left and watched the trailer slowly pass us. Once it passed us, Chantelle hung back at a safe distance.

Have you ever seen a big rig jackknife in front of you, I asked from the back seat.

Oh yeah, she said, as I stared ahead at the back of the big rig. I’ve seen an entire trailer get lifted up into the air.

Yup. They can just blow underneath and whoop, pick it up and put it to the side.

Later, Chantelle said: If you ever decide to become a truck driver, don’t drive in Wyoming. I laughed hard.

That’s the best line I’ll probably hear the rest of this month, I said.

•    Chantelle told me she had a friend who once moved to Laramie. He started to work at a gas station. He asked her what it would take to have a “snow day” in Laramie. Chantelle told me the entire time she has lived in Wyoming, she has only experienced two snow days in her life—and one was only a half day since she was already at school. Even if snow covers your entire car everyone is expected to shovel it off and still get to work, she told me. And I believe her.

As you can imagine, Wyomingites have fun with memes about how lame Californians are when it comes to dealing with the elements. And we absolutely deserve it.

•    Due to the state’s mining and oil industries, I’ve heard that Wyoming has a disproportionate amount of men to women here.

•    Surprisingly enough, I am told that Wyoming is infamous for brewing piss-poor whiskey. I figured a Midwestern part of this country that has such hard, unforgiving winter elements would be a locus for potent, manly, outstanding whiskey that can grow hair on your balls. Shows what I know.

•    Speaking of unforgiving elements, Wyoming is home to many ghost towns.

•    I totally forgot this from my childhood, but Wyoming was a hot spot for dinosaur fossils (which explains why two brontosauruses hang above the shelves of hard alcohol at the bar at The Crowbar & Grill).

•    The salty caramel ice cream flavor at Lollipops in downtown Saratoga is yum-yum-yummy!

•    Rumor has it that there is an L-shaped pool table at the Whistle Pig Saloon in Saratoga. And, in fact, that is true:

•    In Wyoming—or at least in Saratoga—locals say, It’s something fierce out there to refer to gusty winds. I’ve grown incredibly fond of that saying.

•    By and large, folks in small-town Wyoming are very kind and polite.

•    And I hope to someday return to this state for a summer trip with my sweetheart so she can see all the stars on a night with clear skies. 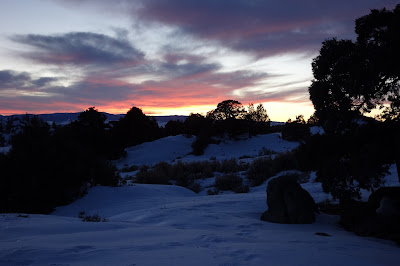