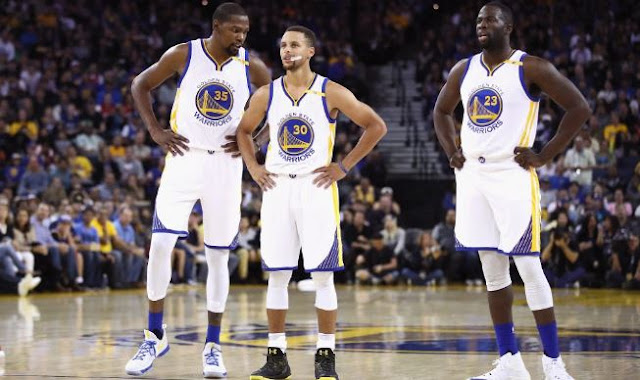 I am an unabashed Warriors fan, but I must say, the beginning of these playoffs feels like déjà vu of the 2014 NBA Playoffs when it felt destined that they would culminate with a Finals rematch between the Heat and Spurs. This year, of course, it feels like the Warriors and Cavs will square off again for the championship. And like the Spurs, it feels inevitable that the Warriors will avenge their collapse in last year’s Finals.

For what it’s worth, this year FiveThirtyEight’s playoff forecast believes the Warriors, with their robust +11.6 point differential have a 59% likelihood of winning the title. The Cavs and their putrid defense come in with just a 2% chance of winning, less than the other top three seeds in the East. Yeeouch:

Just after they traded for Kyle Korver, I couldn’t fathom anyone in the Eastern Conference knocking off the Cavs. Conversely, before KD’s knee injury, I couldn’t imagine anyone in the West defeating a healthy Warriors squad in a seven-game series. Shit has changed a bit since, but now I feel far more confident that the Dubs will make it to the Finals whereas I am much more uncertain about the Cavs. As ESPN’s Marc Stein pointed out, the 2016-2017 Cavs are 22nd in defensive efficiency and will attempt to be the first team outside the top 10 in defensive efficiency to win it all since the 2000-01 Lakers. And speaking of the Lakers, in March the only team with a worse defensive efficiency than the Cavaliers were the Lakers—who were trying to fucking tank for the draft! LeQueen may talk all he wants about not caring what playoff seeding his teams finish with, but wrapping up the last full month of the regular season with the second worst defensive rating is not a tried and true route to winning a championship. (Did I mention the Cavs finished with a worst road record (3-9) against Western Conference teams than the mighty Brooklyn Nets or Orlando Magic?)

Okay, enough about the Cavs, who will be a lottery team in two seasons. Here’s some random (and bold!) playoff predictions before I put down my predictions for each opening round matchup: