AFC Championship: New England at Denver
So in my 2015-2016 playoff predictions I correctly picked this championship matchup, but after watching the games this past weekend, I’m changing my pick: I’m picking the Pats.
My rationale (which has a funny way of going out the window when the two teams actually take the field): despite the home field advantage, Denver’s defense doesn’t impress me. Before the playoffs began I was well aware that this is no great defense, not like the 2013 Seahawks. But last week, without Antonio Brown, without Le'Veon Bell, without his capable backup, DeAngelo Williams, a banged-up Big Ben and their 3rd RB on the depth chart piled up 396 yards on the Burros. It took a crucial 4th quarter fumble for Denver to escape with a win.
With LT Sebastian Vollmer back in the fold, I think Brady and McDaniels will attack Denver through the air with a thousand-cuts, 40-50 pass attempts approach. I think their offense will put up more than 20 points—and that should be enough to put down the Caballitos.
This may be the last time Brady and Manning’s teams face off. (Here's a link to ESPN's Ultimate Brady-Manning Quiz; I scored 8 out of 10!) Right now, Manning may have greater regular season stats but I’d still take Brady any day, especially an elimination game. Like my buddy J-Oro wrote in his conference championship game picks, Brady is this generation's Joe Montana. From my vantage, Manning has always seemed like a more emotionally brittle QB than Brady; too many elements have to be rolling on offense for him to succeed and when they don’t he’s far more likely to implode. Just go back to the second play of Super Bowl 48. In retrospect, Manning and—subsequently—his team, never psychologically recovered from that safety. Put Brady in that situation and I think Denver would still be in the game because he turns to pissed-off anger when his back’s against the wall instead of cowering like Manning tends to when facing a stout defense in pressured situations.

NFC Championship: Arizona at Carolina
Boy was I wrong about that Seattle vs. Carolina game! Obviously, Carolina’s offensive and defensive lines really impressed me in the first half of that last game. On the flip side, Carson Palmer played like a guy who was 0-2 in the playoffs and desperate to not lose (which is different than winning) a game at home in the Divisional Round. He looked really shaky in the 2nd half of their game against Green Bay.
I’m taking Carolina for this game:

However, the Cards best chance to pull off the upset is for their defensive line to have a monster game. If they can shut down Carolina’s running game, the game shifts to Carolina’s receivers vs. the Card’s secondary, and that should be a very favorable matchup for Arizona. At some point or another, you figure Carolina's lack of talent at that skill position will catch up to them...
Posted by Juan at 11:21 PM No comments: 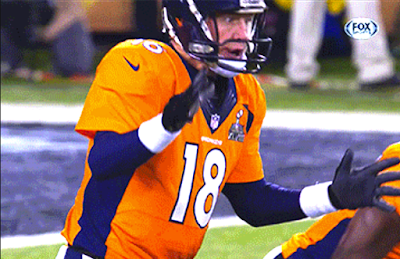 One of the kicks from following sports is making predictions, right? Or maybe I just like being horrendously wrong with my sports predictions? If so, this blog is a testament to that.
Anyway, after what felt like the most unpredictable, topsy-turviest NFL season yet, we have arrived to the playoffs. In both conferences, the 4th seeds—not surprisingly—appear to be the weakest teams while the 6th seeds look like the most dangerous teams playing in the opening round. The NFL should take the NBA’s lead and change their playoff bracketing to eliminate mediocre to piss-poor division winners from automatically qualifying for the playoffs and instead reward teams based on their records. It just seems more practical, which is why the League of Denial probably won’t do it.
But enough pish posh! Here are my playoff predictions. 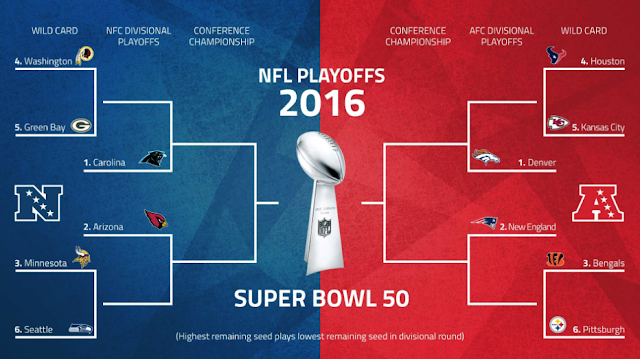 AFC
Kansas City (5) at Houston (4)
Kansas City has been one of the hotter teams down the stretch with a nasty defense coupled with a just-effective-enough offense that doesn’t turn the ball over much. (Kansas City is a distant second behind the Panthers in Turnover Differential with a +14.) Though they’re on the road, I’m taking the Chiefs.
Pittsburgh (6) at Cincinnati (3)
If you’re one of the few persons on this planet who have followed my past inane NFL playoff prediction posts, (hi Sarah!) it shouldn’t surprise you to see that I am enamored, yet again, with the Steelers as a dark horse candidate out of the AFC. Last year, before the playoffs began, I picked them to represent the AFC in the Super Bowl—and then they lost their opening round game. (Thank god I don’t bet on this shit!)
I hope Andy Dalton plays and wins his first playoff game (and one for Marvin Lewis), but I think Pittsburgh will prevail.
Kansas City (5) at New England (2)
Despite having Gronk back from injury, New England’s offense has sputtered in the past few weeks. That’s cause for alarm, especially against a team with the 3rd ranked scoring defense in the NFL. This could be a boring, low-scoring showdown, but New England should have WR Julian Edelman and RT Sebastian Vollmer back for this game. If the past few years have taught us anything, it’s this: it’s not wise to bet against Brady if Gronkowski’s on the field. I’m taking the Pats.
Pittsburgh (6) at Denver (1)
Who will Kubiak start at QB, Manning or Osweiler? What could end up being a more important question is: will DeAngelo Williams be able to effectively play? Pittsburgh’s defense will have to create turnovers—or hope Kubiak starts Manning and pray he is still the early-season version of himself (9 TDs to 17 INTs). Big Ben can’t afford to toss an interception or two like he often has this season. Though I have no confidence in this pick, I’ll take Denver at home with their dominant defense.
AFC Championship
New England (2) at Denver (1)
A few weeks ago, after Seattle manhandled the Vikings in Minnesota, I texted my buddy, Jeff, and boldly predicted a rematch of Super Bowl 48: 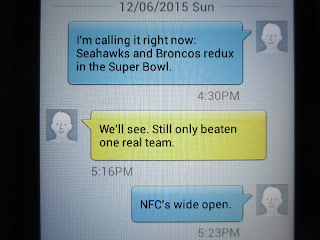 And so, I’m picking Denver’s ferocious defense and Osweiler(?) (or Manning?) over Supreme Leader Belichick and Kylo Tom.
NFC
Green Bay (5) at Washington (4)
Last year, Seattle needed an epic (and I mean epic) choke job from Green Bay to return to the Super Bowl. About a year later, Green Bay looks like one of the top three candidates for one-and-done in the playoffs. The Derogatory-Term-Towards-Native-Americans have been strong at home this season: 6-2. I’m taking Washington.
Seattle (6) at Minnesota (3)
I’m no Vikings fan, but Minnesota had two opportunities to make a big-statement victory at home this season: against Green Bay on November 22nd and the aforementioned blowout loss to Seattle on December 6. Other than depth chart changes in the Seattle backfield, I don’t feel like much has changed between either team since that 38-7 loss. I think Seattle will convincingly win. Bridgewater and Minnesota is still a little too green to win a game like this against a bonafide playoff-tested champion.
Washington (4) at Arizona (2)
Throughout this season, Arizona has consistently flattened bad to mediocre teams. With two weeks rest, I think Arians will have the Cards ready to steamroll the Derogatory-Term-Towards-Native-Americans.
Seattle (6) at Carolina (1)
Awwwww, shit! This might be the best matchup we’ll get in the entire playoffs. This game might be the true Super Bowl. You Niners fans might remember when Jim Harbaugh was your coach and a quarterback named Colin Kaepernick led the offense into Carolina. I have never been to Bank of America Stadium in Charlottte, NC, but the Niners were not intimidated to play there in the playoffs. I highly doubt Pete Carroll’s Seahawks will either. Plus, I still think the Panthers might be closer to the team that lost to Atlanta two weeks ago than a 15-1 juggernaut, and Russell Wilson has been the MVP in the last quarter of the season. I’m taking Seattle.
NFC Championship
Seattle (6) at Arizona (2)
Awwwww, shit! This might be the best matchup we’ll get in the entire playoffs! This game might be the true Super Bowl! Wait, didn’t I just say that a paragraph ago? Oh wait, I did.
This is a toss-up, but I have somewhat followed Carson Palmer’s career over the years. After all, Hue Jackson gave up a ransom to pluck him from the Bengals and then proceeded to play like a has-been for my Raiders before morphing into a viable MVP candidate with Bruce Arians (who is a top-5, probably top-3 coach in the NFL). It’s purely intuition, but I can’t help but feel like Palmer is still due some devastating bad luck this season. That’s why I’m picking the Seahawks to win this one.
Super Bowl
Denver vs. Seattle
It won’t be a blowout, and should be a much closer contest than Super Bowl 48, but I think Seattle’s going to win again. A vanquished, 40-year-old Peyton Manning will ask George Lucas where Darth Vader and Luke Skywalker got their robotic forearms and try to come back for one last season but I’ve said it before and I’m sticking to it—and I have nothing against him—but Peyton, the greatest regular season quarterback ever, will never win another Super Bowl. (If you haven’t figured it out by now, I also hate being wrong.)
And the Seahawks and their annoying 12th Man Fans will celebrate a Super Bowl victory in Jed York’s $1.3 billion dollar Money Trap in Santa Clara.