For years, I have theorized that the swiftest, most profound way to know someone is to hear the music they listen to and know what each song means to them, or how it makes them feel to listen to it. Then a few months ago, I concocted a personality theory based on team sports. I figured it would be insightful to know what position a person would play in the major team sports (at least in the United States of Advertising), no matter their height, weight, or general lack of athleticism in real life, along with their reasons for why they would play that position. For brownie points, I thought it would be further insightful to list what players at that position said person would wish to emulate.

So here I go with mine:

Football: Middle Linebacker
Of all the positions in American football to pick—quarterback, running back, cornerback, safety, and the ever-glamorous placekicker—why did I pick MLB? Because I would rather smack people instead of be the hittee. “Lay the wood” on somebody as they say. Or "smoke" or “light” a guy up. I’d pick middle linebacker over free safety because I would also want to direct the defense. Be the defensive general on the field. Now that the NFL has become more of a pass-oriented league, middle linebackers have to be even more adept than ever at quickly reading offensive alignments in order to help direct the D. If my 5’7, 170ish pound self could morph into a 6’1, 240 pound beast (the same exact height and weight of Ray Lewis and his league-wide heir apparent, Patrick Willis), I would relish all those responsibilities.

Favorite Middle Linebackers:
· Mike Singletary (I remember being a kid, watching the ’85 Bears destroy the Steve Grogan-led Patriots. This was before I officially loved football, but I loved Singletary. Those bulging, intense eyes that could hold a candle to the Eye of Sauron. The way he flew at the ball handler, play after play after play after play. He was physically gifted, intelligent, but most importantly: prepared. And his sheer intensity was palpable through a television screen. Can you imagine how it must have been on the gridiron to be on the opposing side of the ball?)
· Ray Lewis (Other than the Bears ’85 defense, the 2000 Super Bowl-winning Baltimore Ravens defense was the most staunch and devastating defense I ever saw. And this was the man who led them.)
· Patrick Willis

Soccer: Midfielder
Futbol was the only sport I played growing up; I played for ten years. Throughout those years, I typically played fullback or midfield, with a few stints as goalie (horrible!) and forward (pretty horrible, too). I was never a great player; respectable at best. But if I could play one position again—and supremely—no question I would play midfield.

Back when I played, I loved playing midfield because of its very position on the field—el centro. Playing midfield was great because I got to run around a lot. That made me happy—and still does. (It took me 33 years to realize that I am like one of those hyperactive dogs you’re warned about adopting from a pound, the one that needs to be taken out to run around a lot in order to expend their boundless energy. That’s me.) Plus, being a midfielder was cool because it was a medley of defense and offense; I dug that variety. After being a fullback for years, after being burned a number of times on goals, I found comfort in playing midfield because you rarely earned such outright blame for giving up a goal, or missing one (as strikers do).

If I could play midfield again, I would not want to be an attacking midfielder like the great Maradona, Zinedine Zidane, or Gheorghe Hagi. I would rather be The Set-up Man, The Grand Conductor instead of The Finisher. Now on the rare occasions I watch futbol (usually only for the World Cup, because otherwise it would be another commitment to get invested in any of those great soccer leagues throughout the world; I already have a video game addiction I am trying to quell), I find myself oohing and wowing over a great pass just as much or more than an individual play of dribbling poetry and brilliance to notch a score. I love the great midfielders who set up shots on goal, or goals for their teammates. They’re like magicians de la cancha, chess masters incarnate.

My favorite such midfielders:
· Carlos Valderrama (Not only did he have the baddest fucking hair in futbol, but he was a master of the soccer field. Just check out the YouTube video below)
· Roberto Carlos (I loved Roberto Carlos because he was a short motherfucker who played with the best. And his free kicks were stunning. Like cannon shots, man.)
· Xavi Hernandez (The center piece of the great Spanish teams of recent years.)

NBA: Point Guard
Since I’m an average-to-short dude (a dwarf in a Metallica pit; tall in Cambodia), I think I’ve always had an affinity for short NBA players who are ballers on the court. Though I think the Spurs are a perennially boring team, I admire Tony Parker for being a 6’2 tall cat who has made a career of knifing to the basket whilst routinely shooting around 50% from the field. And then there was little 6’0 Allen Iverson who led the league in scoring four times and finished with 24,368 points, good for 19th on the all-time scoring list. Isiah Thomas was a bad motherfucker, too.

But like middle linebacker, like a soccer midfielder, I would love to be a point guard to orchestrate the offense. If I could actually dribble the ball, I would love to be that sleek point guard who pushes his team up the court in transition. I would love to be that guy who calmly calls the play in a half court set, then executes the play—an entry pass, or a driving play to the basket to either finish or pop it out for a three-point shot. I would love to be that player with the no-look pass to a wide open shooter; the guy who, play after play, makes the right decision and places the ball with his teammate in the best position to exploit the defense. On top of this, I’ve been particularly fond of point guards who were two-way stars—a force on offense and defense. In any sport, I have always been most admiring of complete players who could do it all.

Favorite Point Guards:
Oscar Robertson
Jason Kidd (Never a great shooter or scorer but back in his heyday he could do it all.)
Gary Payton (The Glove!)

MLB: Center Fielder
Since this piece is getting long, I’ll cut to the chase like the way these center fielders used to chase down a long fly ball; this is why I would love to play center field (if I could actually make contact with a pitch): I love to run. I love how the best defensive outfielders run with a reckless sense of abandon to grab a fly ball, even if it means crashing into a wall at full speed. I love speedy outfielders who could blaze around the diamond, turning singles or walks into doubles because of their base-stealing prowess. I love how a dangerous base runner can rattle even the most cold-blooded closer in a tight ballgame. (I always think of Red Sox pinch runner Dave Roberts rattling Mariano Rivera in the tide-turning Game 4 of the incredible 2004 ALCS.) And I love outfielders who led off the batting order, batted for a high average and got on base to serve as the catalysts for their offense. Though he wasn’t a center fielder, my favorite baseball player of all-time was Rickey Henderson because he did just this. (#24’s ridiculous 1990 season—.325 average, 28 HR, 65 SB, and a .439 on-base percentage—will forever live on in Nintendo’s R.B.I. Baseball 3.)

Hockey: Right Wing
I like hockey far more than baseball yet I never watch it. But if I could skate with grace and power and deftly handle a puck with a stick, I would play right wing. In hockey, unlike futbol, I would relish playing the striker position because in hockey a goal-scoring wing can also be a physical force like tough guy Cam Neely. Flying shoulder-first to check a defenseman into the corners must be a constant adrenaline rush. And like football, it seems like hockey games can turn on a huge hit that can charge a team up.

Besides smashing hulking dudes into the glass, I would love to be a wing because oftentimes the speediest skaters play that position. I’ve managed to ice skate a few times. (Emphasis on “managed.”) Though I don’t viscerally know, it must be a rush to soar down the rink at speeds near 27-29 miles per hour. I don’t think I’d ever get tired of that tiny thrill.

Favorite Right Wings:
· Pavel Bure (The Russian Rocket, man. That dude could fly. And shoot. At times, it looked like he operated at a speed that other players couldn’t touch. For whatever reason, I always dug that he played right wing even though he was a lefty. It just made him that much more unusual and extraordinary.)
· Theoren Fleury (The epitome of scrappy motherfucker. A 5’6 powerhouse who scored over 1,000 points in his career. Ever since I was a kid, I’ve had a thing for love-or-hate-him athletes: players who are villains if they’re pitted up against your team, but players you love when they play for your team. Fleury was one of those dudes.)
· Cam Neely (He was a bad ass. Like the Hines Ward of hockey forwards.) 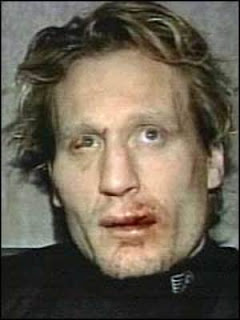 Zombie Roeneck
Posted by Juan at 11:52 PM No comments: