-what a bassinet is (and it’s not a musical instrument!)
-that car seats for babies are rear-facing
-that babies should sleep on their backs
-that newborn babies are voracious eaters
-that baby formula is expensive and, thus, often locked up at supermarkets
-that getting a baby to latch onto a mother’s nipple is not easy
-that women’s’ breasts can get infections from having clogged-up milk (Exhibit A that God is indeed a man. Or a hater. Or both.)
-what “colic” is
-that having a newborn baby poop about 6-7 times a day is not normal
-that it is so not normal when your poor baby has a loose, projectile shit
-that postpartum depression is fairly common (or so it seems)
-that your single, childless friends will largely check out from your life
-that you will suddenly become far more interested in friends and family members who have kids
-that our baby has some strong-ass lungs
-that our baby’s shrills (or what I would consider a 9 or 10 on the volume level of his crying or screaming), if I was in its direct path, could rattle and crackle my eardrums, and it was an absolutely horrendous sensation
-that onesies and baby clothes sold in Amerikkka tend to have some really fucking vapid or obnoxious proclamations: 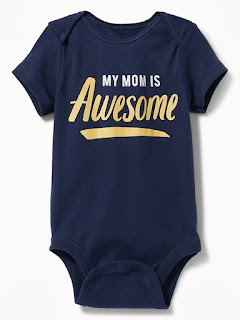 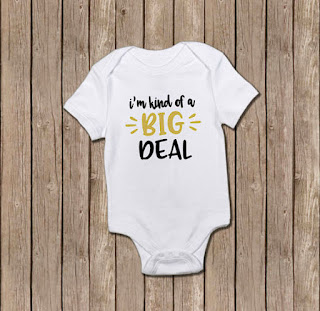 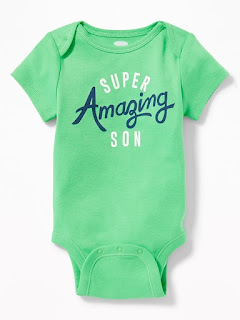 -that I can function at work at a modest level with 4 – 4.5 hours of pieced-together sleep on a regular basis
-that my short-term memory got noticeably worse those first 3 months of Miguelito’s life on Planet Earth
-that cow's milk protein allergy exists
-that all regular baby formulas have cow’s milk protein
-that many babies have a hard time digesting soy milk
-that it is an awful feeling to have to take your wife and baby to the ER
-that Elecare formula is a goddamn life saver for babies with an allergy to cow's milk protein
-that a shitty pediatrician can have a dramatic negative effect on your baby’s life
-that a competent pediatrician can make a world of a difference for your baby (and subsequently your life)
-that it really sucks to take your baby in for their immunizations (especially for their first shots when they turn three-months old)
-that Mari will instinctively wince and cry when the big syringe is pricked quick and deep into our baby’s thigh, and I am well adept at holding and consoling him while this happens (though it still breaks my heart to remember Miguelito’s face as he winced)
-that a Nose Frida snotsucker is fucking brilliant 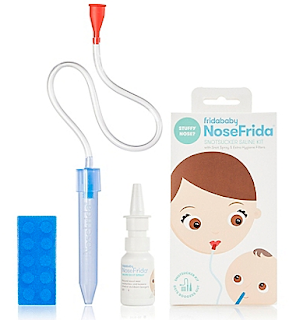 -that there is something incredibly adorable about newborn socks, shoes and mittens because they are so unbelievably small
-that at two months of age babies typically begin to coo and smile back at you
-that I began to really love my son once he began to smile at us (I know that’s fickle, but it’s honest)
-that it is not a good idea to purchase your first house and move when your baby is less than two months old
-that strangers tend to be nicer to you when you have a baby
-that most new mothers lose their hair a few months after giving birth due to a sharp drop in estrogen
-that many new mothers develop muscle or ligament strains in their primary arm from carrying their babies (and daddies, such as me, too)
-that “winning the baby lottery” means you have a baby that largely sleeps through the night—and at adult hours
-that babies do not like having a case of the hiccups (but who does?)
-that babies have a thing for crinkly toys or items
-that peepee teepees are not effective whatsoever
-that Mari is the type of parent who will sing “The Itsy Bitsy Spider” to Miguelito in English and Spanish, and I am the type of parent who will hold our fussy son and sing and hum along to Soundgarden’s “Head Down” or “Fell on Black Days” to chill him out—and both musical approaches worked
-that Miguelito likes the color red
-that our son likes to sit out on our porch to watch cars and folks pass by
-that babies do get really, really fussy when their first teeth start to grow out of their gums
-that your baby will get uncomfortable and very fussy if they ever get constipated (No shit, Sherlock!)
-that there are few medications you are supposed to give to babies
-that pumping your baby’s legs back and forth as if they’re riding a bicycle and massaging their stomach can do the trick in getting your kid to poop
-that a baby’s eyes tend to tear up when they’re taking a poop
-that most public restrooms do not have a changing station
-that holding your baby up to sniff his/her butt to check for poop becomes a routine and practical thing to do 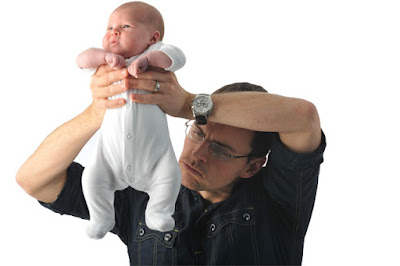 -that I have newfound profound respect for my mom and mother-in-law since they somehow or another raised us and made the time to clean our cloth diapers (oof!)
-that babies have a difficult time acclimating their temperature (which means they will fare worse in higher- or lower-than-usual temperatures)
-that having an old house with no insulation or air conditioning is straight up fucking hellish when you have a baby and the outside temperatures are in the upper 80s or higher
-that shopping malls with air conditioning are a certifiable refuge for cheap-skate parents like us on hot-ass summer days
-that you’re supposed to keep babies out of the sun for the first 6 months of their life
-that babies can begin to eat solids when they are 6 months old—and this is a huge marker for parents since babies will typically need more time to sleep at night in order to digest solid foods
-that you’re not supposed to expose kids to TV or videos for the first two years of their lives because it can negatively affect the development of their brain
-that the day can really drag out and get horrendously boring when you’re taking care of your baby by yourself
-that the first 3 months are definitely the roughest
-that baby’s start to show their innate personality when they turn 2-3 months
-that there’s nothing worse than having a sick baby
-that humidifiers are absolutely worth every dollar since they can help your sick, congested baby breath and sleep at night
-that it can be a drag to try to give your newborn liquid Tylenol
-that our baby loves to be out in public to watch other folks, especially kids
-that carrying a stuffed animal around in public—let alone making it talk—is perfectly acceptable if you have a kid around
-that shopping for our daily necessities has become one of our favorite activities since Miguelito is so chill about it
-that Once Upon a Child has a hokey, stupid name (in my humble opinion) but they fucking rule
-that our baby loves to be outside and will get whiny if he is cooped up inside for too long
-that it’s hilarious to watch a baby’s assortment of faces when they are trying out new foods for the first time
-that if I need to entertain or calm or perplex Miguelito for a minute or two I can simply hold him in front of me while I eat crunchy chips, or gurgle a mouthful of water
-this may be just me, but peek-a-boo never gets stale as long as you have a baby that will grin and laugh in return
-that hand puppets are terrific guest readers for story time at night! 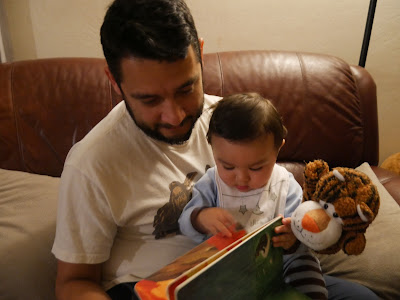 -that babies can sleep through an astounding assortment of loud noises
-that continuous car rides or rides on BART have a magical sleep-inducing power over our baby
-that one of my favorite feelings in this world is when I put our son to sleep and gently place him in his crib
-that it’s absolutely adorable when your baby learns to wave goodbye
-that hats on babies can be ridiculously cute (and I’ve never been into hats)
-that babies will lean or lunge toward an object or person they want to be with
-that a Baby Bjorn is a fantastic invention and worth every penny
-what an ExerSaucer is (I prefer to call them Miguelito’s “command center”): 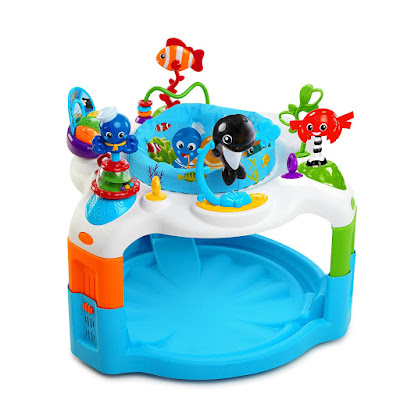 -that we suspect our son is relatively fearless
-that I will not cross the street when I am pushing Miguelito in his stroller and a man with his leashed pitbull is walking toward us
-that pushing our son around in a stroller in public often makes me feel humble and vulnerable in a similar way when I am traveling by myself in a foreign land
-that it is CRUCIAL not to fuck with your baby’s regular naptimes or bedtime because there are few things worse in life than a tired, grumpy baby (especially when you are gassed)
-that I will never ever get tired of coming home and seeing our baby smile at me
-that Mari, Miguelito and I are incredibly fortunate to have our parents around
Posted by Juan at 10:50 PM 4 comments: