Oh boy oh boy oh boy, here we go: the NBA Playoffs! The playoff bracket has finally been set, and I breathed a big sigh of relief this past Wednesday because the Spurs did not land the #4 or #5 spot, which would have meant an encounter in the second round with my beloved Warriors. Did you see what I did there? I’m already assuming that the Warriors and Spurs will advance past the opening round! Okay, okay—I’ve got to slow down. Getting ahead of myself here.

Before I go into my round by round predictions, here’s a couple of executive summary-like thoughts:

1) Two months ago I was not buying that the Warriors could win it all. I just didn’t believe they had earned enough Boy Scout badges to lead the troop. I’ve changed my tune since then. I think they have a really good shot. (Much more on this later.)
2) As a Warriors fan, there’s only one team I truly fear: the Spurs
3) Like NBA gambler Haralabos Voulgaris, I believe there are only three legit title contenders this year: the Warriors, Spurs, and the Cavaliers.
4) If I had to round out the top five teams heading into the 2014-2015 playoffs, I would say it’s the Clippers and Hawks—and in that order.
5) Unlike the 2013-2014 NBA Playoffs, which arguably had the greatest opening round ever with 5 of the 8 series going the distance and a record 8 games decided in overtime, I don’t think this year’s opening round will be as exciting. However, I think the conference semifinals and final rounds have the potential to provide a few epic series that will be talked about for years.

On that note, here’s my opening round predictions starting with the Eastern Conference, which will be less exciting like in recent years:

The Hawks are good. The Nets are not. Hawks in 5.

Ever since their record dipped to 19-20, the Cleveland Cavaliers have been a scorching 34-9. Nothing like a team-bonding event to a bowling alley in Los Angeles to change the landscape of the NBA season! Boston’s an up and coming team. Brad Stevens is a fucking jedi of a coach so I think they’ll pull off one win. Team LeBron in 5.

The Bulls won the season series 3-1 but I wouldn’t be entirely surprised if the Bucks push the Bulls to the brink in this series. Probably going to be the most captivating first-round series in the Eastern Conference. (That’s not saying much.) Kidd’s coached the Bucks to respectability but Thibodeau consistently squeezes all the collective will out of his squads come playoff time. Bulls in 6.

(4) Toronto Raptors vs. (5) Washington Wizards
During the regular season Toronto won all three of their matchups. Will the Wizards surprise again this year in the playoffs? It all depends on Bradley Beal’s health. With him the Wizards have one of the top backcourts in the game. But the Raptors have a pretty good one too. I think the Raptors will devour the Wizards in 6.

Welcome to the playoffs, Anthony Davis! The Brow has the potential to be go down as one of the greatest power forwards ever but in this series he’s simply wading into waves and getting his playoff feet wet before The Splash Brothers wipe them out. The Pelicans are winning one game at most. Warriors in 5.

I know the Rockets have a top-10 defense but without Dwight Howard in the middle they’re one of the least daunting second seeds to come out of the Western Conference in recent years. Early in the year, the Mavs were a slightly scary team with a bonafide offense—and then they traded for Rajon Rondo. If he’s still around, the knight guarding the Holy Grail in Indiana Jones and the Last Crusade would tell Mark Cuban that he “chose poorly.” That said, Rick “I Am Not a Bald Jim Carrey!” Carlisle is a bad motherfucker of a coach. Just ask Gregg Popovich and his reigning champions who almost went down 3-2 to the Mavs in last year’s opening round. This could be a tight series even with the Mavs sporting a point guard who shot a staggering 45% from the free throw line. I think The Big Battle in Texas will end with Houston in 6.

Oh man, this can be a good one, too. Both teams finished strong at the end of the season: the Clippers have a seven-game winning streak and are 14-1 in their last fifteen games while San Antonio just had an eleven-game winning streak snapped by The Brow and the Pelicans. Along with the Warriors, these are the best teams in the Western Conference—and one is getting knocked out in the opening round. It’s kind of a shame. If I had a dream second-round match for the Warriors, sweet baby Jesus I would have loved to see the Clippers play the Warriors just so I can see more of this:

The Clippers have a mighty starting five but their bench is a joke (Austin Rivers! Lester Hudson! Spencer Hawes!)—and the Spurs are still a team that sports 9-10 players who on any given night can make a significant winning contribution. In a playoff series that’s a significant advantage especially for the greatest NBA coach I’ve ever seen. Spurs in 6.

Two months ago this would have been an awesome matchup. Now I’m kind of meh about it. Back then, the Grizzlies were a team I feared (as a Warrior fan) and the Blazers had a decent defense. Both teams have declined since then. The Blazers lost their best perimeter defender, Wesley Matthews, and Gasol just hasn’t been a dominant offensive force for Memphis like he was earlier in the year. I don’t think Stumptown will have another playoff victory to celebrate this year. The Grizzlies owned the Blazers during the regular season. I don’t think that’s gonna change in the playoffs especially with a banged-up LaMarcus Aldridge. Grizzlies in 5.

(1) Atlanta Hawks vs. (4) Toronto Raptors
Although Atlanta won eleven more games during the regular season, Toronto convincingly took the season series 3-1. The Raptors averaged over 107 points per game against the Hawks including a 126-115 shelling in Atlanta. I think Toronto is returning to the Eastern Conference Finals for the first time since Vince Carter’s Air Canada days. Toronto in 6.

(2) Cleveland Cavaliers vs. (3) Chicago Bulls
Thibodeau vs. LeBron. We seem to see this matchup every year in the playoffs. In theory, I think Chicago is the only team in the Eastern Conference that could beat the Cavs but way too many things would have to go right for that to happen. With Rose’s latest injury, I just don’t see it happening. Cleveland in 5.

(1) Golden State Warriors vs. (5) Memphis Grizzlies
Memphis’s frontline of Gasol and Z-Bo can pose problems for the Warriors, but the Dubs dominated the Grizzlies in Memphis a few weeks back. From a physical standpoint I think the Warriors will be tested, but I’m confident we’ll win this series. Warriors in 5.

(2) Houston Rockets vs. (6) San Antonio Spurs
Well goddamn, another big duel in the Lone Star State! Except I don’t think this will be much of series. [With an announcer voice:] James Harden, drives hard into the lane, and he meets a buzzsaw! Spurs in 5.

(2) Cleveland Cavaliers vs. (4) Toronto Raptors
Toronto won their first match of the season in Cleveland but the Cavs went on to win the last three of their regular season matchups. This could be a high-scoring series replete with ESPN highlights but I don’t think it will be very close. Cavs in 5.

(1) Golden State Warriors vs. (6) San Antonio Spurs
Dear god, this is the one series I have had the hardest time picking a winner for. I would be shocked if this series is ended in less than six games. The two most likely outcomes I see are the Spurs winning in 6 or the Warriors taking it in front of the Roarcle crowd in 7. It could be a truly epic series. This is where Kerr’s relative inexperience in the playoffs could be the deciding factor because we know Popovich and his staff will push all the right buttons to maximize their probability of winning—and the Spurs are the penultimate veteran team that have endured their share of epic playoff battles. Alvin Gentry’s presence on the Warrior’s bench can be huge in a series like this one.

In the end, I think it might come down to which team collectively wants it more. Last year’s Spurs squad played with great urgency and desire. They sought to avenge their uncharacteristic loss to the Heat in the Finals. They’re all-time champions so it’s in their nature to want to win badly. I don’t think there’s an on or off switch there, but I think the Warriors have the edge here. I think our best players have been around enough to know that an excellent opportunity to win a championship doesn’t present itself often.

Plus, as Tim Kawakami noted in his Talking Points blog back in late January, the Warriors historically good point-differential bodes well for winning a championship. Here’s a list of other great NBA teams with an excellent point-differential and how they fared in the playoffs:

That's quite a historical trend. I think the Warriors will win in 7.

The Warriors have homecourt advantage throughout the playoffs so the central question for this series is a simple one: can the Cavs come into Oakland and win a game against a team that was 39-2 at home? With an all-time great like LeBron I think they certainly can, but I don’t think they will. Now, can the Warriors win in Cleveland? I think that will be an equally tough task. But I think they can: Warriors in 6.

Sweet jesus, I hope I haven’t jinxed the Warriors.

I can’t wait for these playoffs to begin. 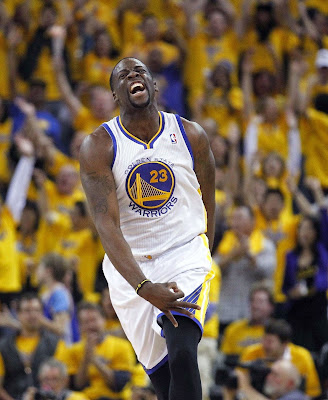