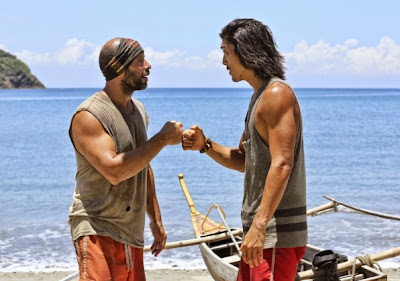 Survivor: Cagayan is down to eight contestants: Woo, Tony, and Trish from the original Brawn tribe (for those of you at home keeping score on the three tribes that opened the season), Jefra and Jeremiah from the Beauty tribe, and Tasha, Kass, and Spencer from the Brain tribe—the one tribe, admittedly, that I found myself rooting for at the beginning. With the season finale a little over a month away, I figured it would be fun to put down my thoughts on the season and to lay down my odds to win it all.

Since eighteen contestants have been The-Tribe-Has-Spoken downed to eight remaining players, let’s start by handing out (or bequeathing, if you prefer) awards to this season’s contestants:

Best Game Played
Week after week, up until last week, I would have to say that Tony has been playing the best game out on Cagayan. He found an immunity idol with some serious sneakiness (tricksy hobbitses!), has been competitive in most challenges (finished a surprising second in the first individual immunity challenge: the balancing act in the ocean), pulled that crazy spy-shack bit weeks ago which will inevitably go down as Survivor lore, turned the raid-the-opposing-tribe’s camp reward challenge victory into an absolutely brilliant trick that nearly got Jeremiah voted off by his tribe. In sum, this motherfucker has been straight balling on Survivor. He’s been outhustling everyone—which is good and bad—and he’s been cunning and perceptive and decisive. In all likelihood, his backstabbing of LJ during the last episode may cost him a chance of advancing, but until that Tribal Council blindside, Tony’s been playing the most outstanding game from a physical, strategic, and social standpoint.

Runner-ups: Spencer, Kass, and Trish (more on these three later)

Best Strategic Game
I think this has to go to Trish (Yoga Flame!), who has been a pleasant surprise. She’s the secret Grim Reaper of Survivor: Cagayan—maneuvering behind the scenes to procure the key tactical votes and flips to get people she wants axed off. Don’t believe me? Former Survivor contestant Stephen Fishbach credited her as the “the secret strategist of this season” in his Survivor blog. And here’s the evidence: Trish sided with fellow Bostonian, LJ, in the fourth episode to help blindside Cliff Robinson, which in turn helped to knock off the Medusa-like Lindsay into quitting the game. Then, after both tribes were merged, she was perceptive enough to see a fracture in the Aparri alliance and with a few words, after Tony failed to get Sarah back on their side with an array of promises, got Kass to flip on her alliance and knock off Sarah. For that key vote, Trish was the one who mobilized her alliance. During the last episode, I think she saw through Tony’s wheelings and sensed danger for their alliance before LJ had any idea that he was getting blindsided. Through and through, Trish has been perceptive, consistently persuasive with a host of contrasting players (like Kass, Tony, and LJ), and boldly efficient with her behind-the-scenes work in leading up to tribal councils.

She has done poorly in the challenges, which is why I don’t think she’s a threat to win it all, but I wouldn’t be surprised if she makes it to the final. And she won’t be a master coattail rider like Sheri from Survivor: Caramoan; thus far, Trish’s skills in reading people and anticipating moves has made her a quietly cunning but pivotal player.

Weakest Player Still Alive
Hands down, it’s Jefra. So far, the one thing she has going for herself is that she seems to be likeable, hasn’t gotten anyone to dislike her, but this means she hasn’t gotten her hands dirty, which is a task every single Survivor winner has to check off at some point or another. Along with Kass and Trish, she has been a weak player in all the challenges. I just don’t see any way she can win this game. Morgan was along for the ride, too, and I wouldn’t be surprised if Jefra is voted off soon by strategic alphas like Tony who can’t stand players who don’t deserve to progress further in this game. On the other hand, Jefra is my top candidate for The Next Sherri Biethman—an attractive woman who is taken to the final three simply because she is not a threat to win over the jury.

The Erik Reichenbach Award (for Dumbest Player of the Season)
This one’s easy: Garrett Adelstein is the clear winner. Honestly, his buffoonery during the first episode was jaw-dropping. It rivals Erik’s incredibly stupid move in Survivor: Micronesia:

Odds to Win It All
So I looked around the interwebs—not too thoroughly, may I add—for betting odds on who will win this season of Survivor. To my surprise, I found nothing, as in I found no place where I could actually put money down and pick my winner. Despite this, I thought it would be fun to put down my favorites to win it. I’m no Las Vegas hustler, not even an occasional gambler so I offer no actual odds; I’m just putting down, from top to bottom, my favorites to win it.

Jefra’s non-candidacy has already been explained. Up until the last episode, Tony and Woo were my top two threats to win it all, but I think after backstabbing LJ he’s going to lose the trust of his alliance. The only way I see him surviving the next tribal council is: 1) if he wins the Immunity Challenge, 2) finds a hidden Immunity idol, or 3) finds the mysterious idol that Probst has alluded to a number of times in recent episodes. That’s the only way. Who wants to keep Tony in an alliance? His paranoia and wheeling-and-dealing is now right up there with a coked-the-fuck-out Tony Montana at the end of Scarface. You can’t trust a dude like him. Like Fishbach, I wouldn’t be surprised if Tony is voted off during the next episode. He’s the one big dog left in the game.

Kass, admittedly, has been my personal favorite contestant this season; I find her attractive—like a poor woman’s Elizabeth Shue, dare I say. She's incredibly smart and confident. I love how blunt and witty she is in her one-on-one camera interviews, and how forthright she has been with contestants themselves. In her interviews, it’s clear that she’s really thinking the game through. Even her decision to flip and knock off “Queen Sarah” was a tactical move, not an emotional reaction. Along with Trish, I think she’s played the most brilliant strategic game; it’s clear she’s a student of the game, and she seems to be able to step back from the game and enjoy it on a level that reminds me of Survivor: Caramoan winner, John Cochran, so I think she’s a threat if she can manage to compete and win a few Immunity challenges. But I think that’s a big “if” at this point. There’s no evidence to show that she can all of a sudden become a challenge beast; she’s been really bad at them so far.

Jeremiah’s a coaster; he hasn’t really gotten his hands dirty yet, and he doesn’t seem to demonstrate an aptitude for conniving that is requisite for winning this game. However, he is a legitimate threat in the physical challenges; he hasn’t pissed too many people off, so if he can get to the final three, I think he’s a contender.

Spencer—the Mitt Romney lover (for shame, young man, for shame)—has emerged as a true threat. He has a hidden Immunity idol, has been competitive to strong in the challenges, and he’s been smart and opportunistic with his votes and alliances. I think he’s been my favorite player to see pissed off, and he hasn’t really ticked anyone off yet. However, he’s not the most likeable guy, which is where he might lose the game if he manages to make it into the final three.

Similarly, I think Tasha’s played a careful, smart game. She’s flown under the radar, which is a quality that Cochran used to get far and ultimately win Survivor: Caramoan. Amongst the women—after winning the last Immunity Challenge—I think she’s the one legitimate threat to win it all. Other than not being a very strong strategic player, she hasn’t shown a weakness in her game. From a social, intellectual, and physical standpoint, she’s been a solid player.

Which brings us to Woo, who from the beginning (this can be verified by my fiancé, Lady Burgermante), has been one of my top three candidates to win it all. He’s a fan and student of the game: he has anticipated tribal merges, clues, and his ninja theft of Spencer’s hidden immunity idol clue was outstanding television—a candidate for Survivor lore. He’s one of the top physical threats, well-liked (so it seems), and I think he’s not quite flown under the radar but has managed to stay in Tony’s shadow, which is good for him. From a comedic/charismatic standpoint, he’s raised his level in the last two episodes, and I think he’s the quiet assassin left in the game. I think he’s capable of being a chameleon. If Tony is knocked off, I can see Woo shifting his game to another gear for the home stretch, specifically his strategic game. Of all the contestants left, I think he’s the only one with an extra gear, an extra facet to show. With everyone else, you know what they’re capable of, but Woo is the wild card in my eyes. I can see him aligning with Trish and someone else to go to the final. Plus, of all the players left, I can see him going on a challenge tear to ride into the final where I think a jury will recognize his strong overall play and reward him with the title of ultimate survivor.

Of course, he falls off a tree next week, so who knows what will happen next?