Thoughts on Work, the Forty-hour Workweek and Work-Life Balance

At my office we have a large dry-erase board in the kitchen. We use it to ask questions for staff members to anonymously respond to. Recent samplings include: “If California could have a state meal, what would you include?”, “What are your favorite water-saving tips?” and “What was your first memory?” For the past week the question has been, “What are your strategies for maintaining a healthy balance in life between work, family …?”
I was the first to respond.


I scribbled, “Kind of impossible to achieve (for long) w/ a 40-hour workweek. Or, as Faulkner put it: “One of the saddest things is that the only thing a man can do for eight hours a day, day after day, is work…. Which is the reason why man makes himself and everybody else so miserable and unhappy.”
By the end of the day the board was practically covered with responses from our staff: 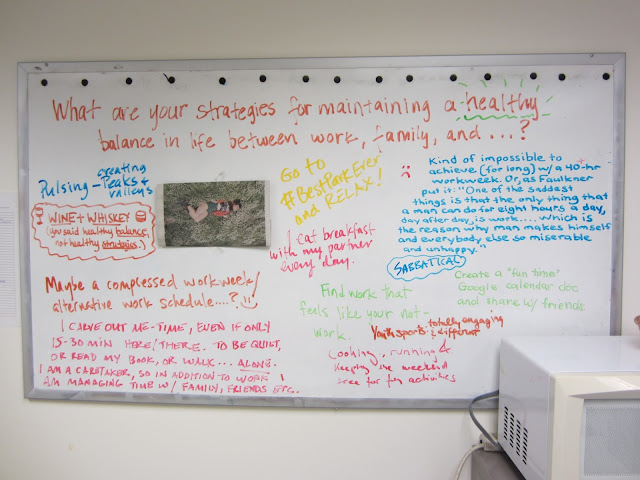 One response stood out to me: “Find work that feels like your not – work” In all likelihood, it was hastily written, but I think we all can understand what this person meant to write.
I was driven to write this post in response to that comment. See, throughout my adult life, I’ve heard iterations of that sentiment. The most popular ones I’ve read and heard is “Find work that makes you happy,” (a classic American directive) or “Find work that fulfills you.” I can only speak for myself, but I can tell you that I have, over many years, drunk the proverbial Kool-Aid on such sentiments. For years I was in complete accord with that goal. In theory, I still believe it’s a novel goal to aspire to, but as I’ve gotten older, the more I see how impractical and foolish that sentiment is for the vast majority of humanity.
Because here’s the deal: according to the Worldometers page, our present human population is over 7,329,000,000. In part, it is:
a)      ludicrous to expect that we can provide a job for every single human being, and
b)      it’s absolutely insane to expect that each of these human beings can one day have and retain a “job that feels like you’re not working.”
Last year I got married at the ripe age of thirty-five. I’ve been working longer than I’ve been making out with women. (I’ve committed a lot of mistakes in life.) Honestly, I am willing to posit that it is farmore difficult to find a fulfilling job, a “dream job”—a job that you love—than it is to develop a loving relationship which results in getting hitched. That’s why, from this day forward, I say a resounding, all-caps, put-it-in-bold fuck that to this ridiculous societal goal in which we’re all supposed to strive to find a job that feels like you’re not working. It is simply not feasible for the vast majority of humanity. It’s akin to telling everyone—men and women—that we should all strive to be physically beautiful when that’s just not realistic because we have this element in nature called “diversity.”
But anyway, now let’s turn our attention to this whole life-work-balance thing. I happen to have opinions on that matter, too.
Let me start by saying that unless you’re one of the fortunate ones who does have a job that doesn’t feel like working, I think a forty-hour workweek is inhumane. I think it’s “inhumane” because it inevitably tilts the scales toward a waking life that is disproportionately devoted toward earning money than, you know, actually trying to fucking savor life. That’s why I call it inhumane.
I’ll use my current worklife as an example. Right now, thanks to having a job in the city I live in, 46 ½ hours of my week—about 41.5% of my waking life (if we base my total waking hours on eight hours of sleep per day—and god knows I never achieve that)—is devoted toward making money (or earning bananas, as I prefer). Here’s the breakdown:
40 hours worked per week
+4 hours per week spent getting ready to go to work (40 minutes per workday)
+2.5 hours per week spent commuting to and from home (.5 hours, or 30 minutes per workday) = 46.5
Other than that 40-hour workweek, I have it pretty sweet. (And how many of us work more than forty hours per week?) Sometimes I cycle to work in less than ten minutes. The ride back home takes about 15 minutes, on average. I’ve had much worst commutes—and I certainly know people who have much longer commutes. 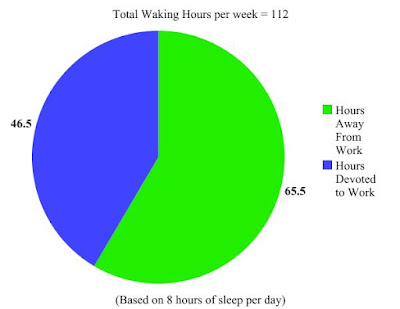 This leaves me with 58.5% of my waking life away from work (7 days x 16 hours = 112 – 46.5 = 65.5). Since none of this time is spent commuting or preparing to go to work, it is, in theory, supposed to indicate the total amount of time I have to be free.
But how free can we be?
A few common activities that cut into this time may include:
By the way—if you haven’t noticed already—these common activities I listed do not include anything related to child-rearing or taking care of a pet because neither one is a responsibility I currently have. But if you’re a parent, just think of all the other daily duties you can tack onto this modest list.
And this list doesn’t include resting, or recuperating from our respective occupation.
In the end—in comparison to the significant chunk of time we devote each week toward earning income—we’re often left with little time for everything else. Like time for physical recreation. Time to be with our family. Time to be with our friends. Time for play. Time to create. Time for cultural exposure (like catching a play, visiting a museum, or watching a film). Time to volunteer in our communities. Time for religious/spiritual observation. Time to devote to being a well-informed citizen. Time to debate. Time to reflect. Time to read. Time to think. Time to breathe. Time to be.
So how free can we be within the confines of a 40-hour workweek?
Not too free, in my humble opinion. Which is why—if I could change one policy in our nation—I would change our workweek to 30-32 hours per week. Those 8-10 extra weekly hours may not seem like much, but they add up over a year. They add up over a lifetime. Just imagine what we could collectively do with all that free time.
But that’s the thing—if I may take my turn in sounding like a conspiracy theorist: I don’t think the elite rich who really run this country want us to have more free time.
They don’t want us to have more time to read.
They don’t want us to think.
They don’t want us to get educated.
They don’t want us to be a well-informed citizenry.
Instead, they want us to be divided. They want us fighting for scraps. They want to have us pitted up against one another when we should be acutely aware of just much they have fucked us over the past 30-40 years. Keeping us occupied with little time to ourselves is part of their plan for maintaining their exuberant wealth and power.
See: 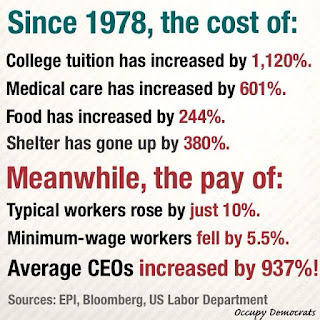