Last week, I went to San Francisco General——my old cancer-stompin’ grounds——for a CT scan appointment. When I rolled up to the hospital from 22nd and Potrero, I stared with awe at the new hospital building under construction. It had only been three or four months since the last time I visited. In that short time, seven stories of steel beams had been erected by the historic brick buildings that my mom does not like to see because it brings back “malas memorias.” The exoskeleton of a bridge connecting the old hospital to what will be the new one was fused. As I approached with my bicycle by my side, a huge smile came over me. I snapped a picture to document this unfolding change.

When I walked up to the fence that gated off the construction site, I felt overcome with joy as I stared up at the building under development. Part of the new foundation is being built over the rotunda where I told my mom I had lymphoma over three years before. It was a strange sensation, as if part of my history was being literally paved over. But in the end, I smiled with wide eyes, amazed to behold all this change. To be alive for it. 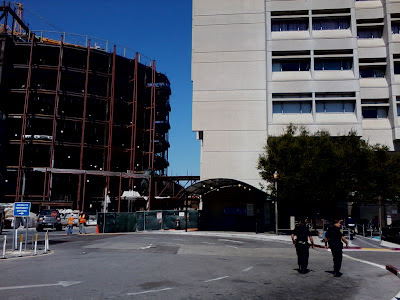 A few days ago, I joked with my dearling, Mari, that I can feel whole again now that the football season is starting again. Of course, I was being exagerado, but it does round me out in some way. Football's a nice diversion from the overall dire state of our planet and I've always loved looking at football stats ever since I crushed hard on Nintendo's Tecmo Super Bowl when I was a kid, racking up ridiculous season numbers against the computer with the Randall Cunningham-led Philadelphia Eagles. I particularly love this time of the season when everyone is making silly and bold predictions for the season: who will win their respective divisions? Which rookies will have the biggest impact on their teams? Who will win the Super Bowl? I love it all!

So all that said, three teams stand out for me as having the most impressive victories for Week One: the Atlanta Falcons, the Niners, but most especially the Patriots. (I was tempted to include the Cowboys, but I still need to see a week or two out of Rob Ryan's unit to show if their defense is legit with two shutdown corners--or if the Giants simply laid a Super-Bowl-hangover-worthy performance on Week One at home.) Well damn, maybe all that preseason hype about Matt Ryan taking charge of a more high-octane offense is well-founded, huh? His stat line the first week: 23/31 for 299 yards and 3 TDs on the road against what is supposed to be an improved Kansas City defense. Their offense had 31 passes to 23 rush attempts (though K.C. seemed to be stacking the box cuz Turner had a 2.9 yards per attempt average). Julio Jones and Matty Ice seem to be locked on in a way they quite weren't last year, so the Birds can be a surprisingly dangerous team this year. We'll see. Their home opener against the Broncos should be more telling but this was an impressive start.

What can you say about the Niners, they went into Lambeau and imposed their will on the Packers much like the Giants and their vaunted pass rush did in last year's playoffs. Gore ran for over 100 yards and Alex Smith looked chillaxed in the pocket in a hostile road environment. Looks like the Packers are offensively still where they were last year despite the addition of Cedric Benson, which is bad news for them. And it looks the Niners are improved over last year's club. I am curious to see how Smith plays next week at home against the Lions. The biggest improvement over last year's club just might be the brainy Alex Smith having one more year with QB guru Jim Harbaugh and the same offensive system. Depending on how they do next week (I think they're a lock to win given Detroit's shoddy first week performance), that Niners-going-to-the-Super-Bowl hype could be, as Hammer once said, Too Legit to Quit, man.

But damn, the Patriots looked mighty, mighty impressive. Scary impressive: manhandling a playoff contender on the road on both sides of the ball. All-world speed demon Chris Johnson: 11 rushes for 4 fucking yards at home. The Tennessee Titans with their strong offensive line: 1 net yard rushing to 162 by the Patriots. (Grant it, last year's Titans run D was in the bottom third of the league.) With Brady back there, with a good run game, that's downright scary. What's even more frightening to the rest of the league is the Patriots defense allowing 284 total yards on the road to what should be a respectable team. Remember, the Pats D last year gave up the 6th highest amount of yards in NFL history. It's one week, but that unit looks like it might be vastly improved. If their run game is indeed strong and they have a top-15 defense, shit, I'm not sure if anyone can beat them this year.