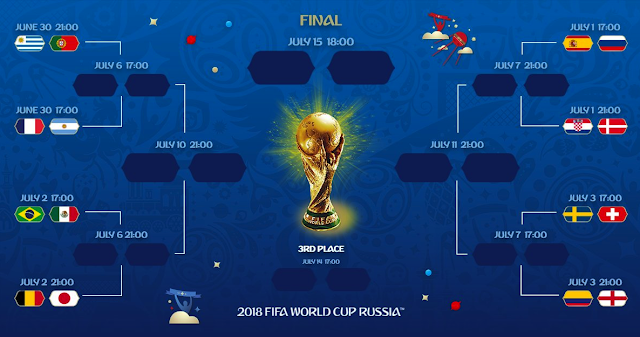 We waited four years for sport’s greatest tournament, and now we’ve reached the dramatic knockout round. (And somehow or another, this is my first soccer blog post ever!)

Before I lay down my picks for the rest of the tournament—which I thought would be fun—it’s worthwhile to note who I am inclined to root for since that can reveal a bias in my picks. Now that my beloved Perú is eliminated (boohoohoohoo), this is a breakdown of who I’ll be cheering going forward, akin to what my Peruvian literary nemesis, Daniel Alarcón, put down on his Twitter:

1.    México (due to my place of birth, my undying love of mole, and the compact and obligations of marriage)
2.    Colombia & Uruguay (yes, it’s a tie)
3.    Brazil (teams that play beautifully should be rewarded, even if they’ve won the Cup five fucking times)
4.    Any team that has never won the World Cup
5.    Spain (they won the Cup in 2010; if they hadn’t, I would have them higher)
6.    Other European teams that have won the Cup (i.e. France and England)
7.    Any team other than Argentina (sorry Pulguita; nothing against you)

Even though I’m just some dude who occasionally wears a Peruvian soccer jersey, here are my picks: