Are you ready for some football?: my 2014 NFL Preview 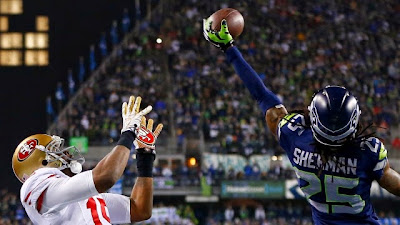 Well, well, well; it’s that time of the year again when pigskins go zinging through the air, its every movement followed by 22 superhuman beings and packed stadiums all across ‘Merica. Last year, the Seahawks annihilated the statistically greatest offense of all time (though it clearly wasn’t in actuality; give me the 1994 San Francisco 49ers any day over a Peyton Manning regular season juggernaut) to bring the Lombardi Trophy to the Emerald City for the first time. Can they repeat again? Can the Seahawks cash in on the final season of Russell Wilson’s rookie contract before that loaded roster is imploded due to budget constraints?

Like everyone and their football-watching mother, I couldn’t stop myself from making predictions about how this season will shake out. How piss-poor will my predictions be this season? And could I luck out and correctly pick this year’s Super Bowl champion?

So, without further ado, I humbly offer my predictions for this year’s division champions and Wild Cards.

AFC East:
New England
Judging from ESPN’s listing of NFL predictions for this year , I don’t think any sports writer is picking anyone other than the Patriots to win this division. Even if Brady were injured and lost for the season, they would probably still squeak out a division title. That said, I think one of the Wild Cards will go to either the Dolphins or Jets.

AFC North:
Baltimore
As far as I’m concerned, this is the most intriguing division in the AFC. Although I don’t think the Browns have a legitimate chance of winning the division, I think all four teams can contend for it. At home, none of these teams will be a pushover. In terms of organizational pedigree both Baltimore and Pittsburgh have what it takes to win the division; Cincinnati certainly has the talent—except they have an average quarterback getting paid like a franchise QB.

So why do I think Baltimore is going to win it? In terms of offseason moves I think the Bengals are in for a moderate to serious let down; I think losing both of their coordinators—especially Zimmer on the defensive end—is going to hurt them. Plus, I have a feeling the offensive line isn’t going to be as strong as they have been in recent years, which means good defenses are going to expose Dalton for the poor pocket passer he is when under pressure. (Read Bill Barnwell’s excellent article about The Red Rifle .) By the end of this year, a more appropriate nickname for Dalton will be The Red BB Gun. (I predict that after this season the Bengals are going to pursue another franchise quarterback through the draft.) In fact, I predict that the Bengals are going to implode; this might be Marvin Lewis’ last season at the coaching helm if they fall to a 6-10 record, which I think is plausible.

Pittsburgh still looks so-so; you can’t count them out with a mostly healthy Roethlisberger, the best quarterback in the division. However, I think Baltimore is going to improve on both sides of the ball; best case scenario, their defense can resemble the mighty Ravens defenses of the recent past, and I think their running game is going to be significantly improved with Gary Kubiak as their offensive coordinator, which means Flacco is due for a comeback year.

In sum, I think Baltimore has the best mixture of talent and good coaching to win this division, which is why I’m picking them.

AFC South:
Houston
This division resembles the AFC North in that I don’t think any team—including Gus Bradley’s Jacksonville Jaguars—will be an easy team to defeat. Like the Browns, I don’t think the Jaguars are quite ready to contend for the division title, but they’re not too far off.

I think this will be the most mediocre division in the AFC. A 9-7 record could be enough to win it. Indianapolis, Houston, and Tennessee figure to be around .500 teams, but I’m going to go out on a teeny limb and predict two things: 1) the Colts magical run of winning close games in the Andrew Luck era is coming to a screeching end this year; they’ll break even—or worse—in tight games, and that will be enough to knock them off the top, and 2) Houston is going to make a significant bounce-back this year. From a talent standpoint last year’s Houston Texans were not your typical 2-14 team. They weren’t the 2011 Indianapolis Colts who went 2-14 with the likes of Curtis Painter behind center; the Texans lost a lot of close games last year and essentially gave up on their coach midway through the season. With JJ Watts and Clowney lining up in their front four, they’re going to be a nightmare for many teams. Their defensive line has two of the biggest freak athletes in this league, perhaps this planet.

I think they’ll finish 9-7 and squeak out a division title over the Colts, who can’t overachieve for three years straight. There has to be some sort of law of nature against that.

AFC West:
Denver
Not much to say here: the Broncos will win this division easily. Their defense should be improved; their offense will probably have a slight drop-off, but not much. The Chiefs will come crashing back down to mediocrity and I think the Chargers will easily be the second best team in this division. Losing Whisenhunt as their offensive coordinator will hurt but I think their defense is going to continue to improve. At the end of the 2013-2014 season they found their identity as a defense, and I think Pagano is going to build his defense from that experience. With a few more playmakers, I think they’ll be a middle-of-the-pack defense with a potential top-10 offense. Since the Chiefs and Raiders are going to suck, I think the Bolts will be back in the playoffs as a Wild Card.

And since the Raiders are my team, here’s a few predictions for my beloved Silver & Black: for the second straight season—and it pains me to type this—I think we’re going to finish 4-12; the team is improved but we have one of the toughest schedules this year. McKenzie’s going to keep his job thanks to what looks like will be a solid to good to possibly really good 2014 draft class (so far no cuts! No Tyler Wilsons! And I agree with columnist Tim Kawakami: Derek Carr is the best quarterback prospect the Raiders have had since Rich Gannon’s glory years.) but Dennis Allen will have to go. And thank god because I have never had any reason to believe that he could be a good coach.

NFC East:
Philadelphia
Aww, yeah; Motownphilly's back again! If he stays healthy again, I think LeSean McCoy may lead the league in touchdowns this year. The Philly offense should be outstanding, and that defense has to get better at some point, right? In time, I think Jay Gruden will bring the best out of The Self-Absorbed One, RGIII, but I don’t have much reason to think he’s going to make a big comeback-splash this year when their preseason brought up the question: Has Kirk Cousins outplayed RGIII? Not a good sign. Having DeShit Jackson on their roster should be good for one victory but it won’t be enough to lift them over the Eagles. Eli should have a better season with a new West Coast offense but their defense is not like the one that recently won them two Super Bowls over the Patriots. And the Cowboys? Ha, they’re a joke, like their owner (though I wouldn’t be surprised if they have a top-5 scoring offense—but, they’re going to have one of the worst defenses in the league.)

NFC North:
Green Bay
I’m on the Cheesehead bandwagon, man; I have been for a few years since I predicted their Super Bowl winning run back in 2011. Last year I said I’d take Aaron Rodgers over Tom Brady or Peyton Manning and I’d still take him over those two this year. Despite playing half of their games in Lambeau Field, Green Bay could have the top scoring offense in the league. The question with them has always been: but what about their defense? Is it time for Dom Capers to go, or can he lead a top defense again? I have my doubts, but I think they’ll have a statistically average defense, which, coupled with a Rodgers/Eddie Lacy-led offense is going to be more than enough to top the Bears, Lions, and Vikings.

NFC South:
New Orleans
This is an interesting division. Will Mike Smith’s Falcons bounce back into the playoffs? Will Lovie Smith pull a Jon Gruden and maximize Tampa Bay’s talented roster enough to win the division? Or will Drew Brees and Sean Payton continue to do their thing and win this division?

I’m betting on the latter. The Saints defense should continue to improve, which is scary. And have you seen how accurate Drew Brees is?

NFC West:
Seattle
Arguably the toughest division in football. Despite a few defections, I think Seattle has too much young talent on both sides of the ball to stumble off their perch as the kings of this division. On the other hand, I think San Francisco could decline on both sides of the ball, especially their defense. With Aldon Smith suspended for the first nine games of the season and Navarro "Bad Motherfucker" Bowman already out for a chunk of time, the Niners are a Patrick Willis or Justin Smith injury away from possibly being a mediocre defense. And then the offense: are they really going to be a vastly improved unit if they switch to being a more pass-happy-oriented offense? Barring how the new defensive holding rules pan out, will this offensive transition really help them beat their West Coast nemesis whose strength is their pass defense (especially when Seattle has lost some of their DL depth, which I think may make them more vulnerable to a good rushing attack than last year’s defense)? I think too many things have to break for the 49ers to win this division, especially when St. Louis’ defense is continuing to improve to Tennesse-Titan-Jeff-Fisher-led heights. (The Rams might be improved with former Niner, Shaun Hill as their starting quarterback.)

As of right now, I think there are four legitimate Super Bowl contenders: Seattle, Green Bay, Denver, and New England. On the cusp (and in order): New Orleans, San Francisco, and Baltimore. 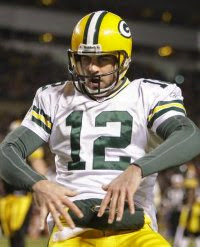