How Its Been To Not Watch Football 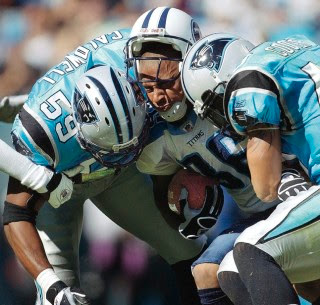 “Baseball is a 19th century pastoral game. Football is a 20th century technological struggle…. In football, the object is for the quarterback—otherwise known as the field general—to be on target with his aerial assault, riddling the defense by hitting his receivers with deadly accuracy, in spite of the blitz, even if he has to use the shotgun. With short bullet passes and long bombs he marches his troops into enemy territory, balancing his aerial assault with a sustained ground attack which punches holes in the forward wall of the enemy’s defensive line.”

-George Carlin on Baseball and Football

Before this NFL season began, I decided to stop watching football.

I had spent the previous twenty seasons being a devoted Oakland Raiders fan.

So how has it been not watching football after all these years of fandom?

Even though the Raiders are 9-2 and currently #2 in ESPN’s NFL Power Rankings—which is fucking remarkable!—I do not miss watching football at all. Half a year ago, when I was still talking myself into giving up what had been my favorite sport for decades, I would have been surprised to imagine myself saying that. It’s been weird not watching, though. Although I was unaware when the first week of the regular season began, which was a delightful surprise, once I knew that the season was on, it was strange being at home on Sunday during those first weeks of the regular season between the hours of 10 a.m. and 4 p.m. PST and not once turning on the television to watch a game or snippets of its coverage. I also felt a bit aimless, and, yet, at the same time, free to plot how else I would like to spend the day. Now that I’ve gotten used to not tuning into the games, I no longer have that I-feel-like-something-is-amiss feeling on Sundays, but I have continued to feel unburdened in not having my day tethered to a Raiders game, or another contest that looked like it would be a great matchup.

Now that I no longer want to support the National Football League—a reprehensible sports organization that is the only one I can think of that can sit at the same table with FIFA—I’ve become acutely aware of just how prevalent it is in our American society. I see a shit-ton of articles all over the interwebs about football, especially fantasy football. I notice advertisements everywhere: at bars. Stores. My former gym. All the license plate frames in which people stake a claim to their chosen football tribe. If you’re out and about on the town on a Saturday or Sunday during this time of the year, it’s challenging to find a TV that is not showing a college or NFL game. Football is God in AmeriKKKa. And stadiums across this land are like national shrines come Sunday.

For the most part—sans necessary cyclical life errands (like washing my dirty chonies, or gathering & buying groceries)—Sundays feel like free days for me now. My daily rhythms aren’t noosed to the NFL’s schedule. Making time to write on Sundays is no longer the weekly, regimented struggle it had been in years past. My wife has appreciated the change, too, because now her Sunday rhythms aren’t also tied to the NFL’s schedule since I no longer hover about our living room for significant portions of the day watching a barrage of commercials and a sport she never took a liking to, despite my interventions. (Two years ago, I tried my darndest to teach Mari some basics of the sport, such as the difference between a 4-3 and 3-4 defensive alignment, and the names of the various positions—but we found it wasn’t so simple to explain. Not like soccer. Or basketball. Or even hockey.)

Perhaps most significantly, I’m not reading as much about football like I used to when I was a fan. Last season, I once remarked to Mari that what I probably most liked about football was reading and listening about it: the post-game analysis.; the pre-game analysis; and the podcast debates and discussions about football. But what I really fucking loved was devouring all the statistics, all goddamn season long. Even though I haven’t watched one game this entire season, I am still reading about football. Not nearly as much as before, though. Last year, I wrapped up most of my Sundays, for nearly half of the year, reading for an hour or more about all the NFL games—and that would bleed into Mondays with the updated Power Rankings on various sites and the subsequent lengthy articles from my favorite NFL writers (Barnwell! Mike Silver! Tim Kawakami!) Not reading about football has been harder to completely forsake, especially when it comes to the Raiders. On Sundays, while I’m writing (or trying to write), I still periodically click onto ESPN’s website to glimpse at the scores for their games (and other contests). I often click on the box scores to inhale some player stats. It’s hard to shut off the valve that followed one team for twenty years, even through many, many shittastic seasons. It’s not like that allegiance has dissipated; I’m just no longer okay with watching these mighty men—some of whom I had grown to admire (I’m thinking of you, Junior Seau, and Thurman Thomas)—irreparably destroy their minds, their lives, their bodies—and their families—for my entertainment.