Concord Sucks (or All Hail the Penultimate Car-centric Suburb!) 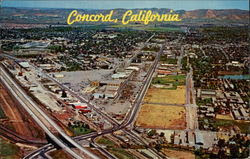 It took me less than two weeks to abhor Concord, not only as a cyclist but as a motorist as well. Prior to this month, I had only been in Concord once in my life. Now that I work there, I traverse its streets five times a week, primarily as a cyclist but sometimes as a motorist. In large part, it’s been an agonizing experience. I grew up in Fremont, CA—another California suburb that was designed with vehicular traffic as its principle means of transportation—but man, that town has nothing on Concord when it comes to being a car-centric municipality.

Concord’s the least bike-friendly city I’ve seen in the Bay Area; it’s not even close. Back in February, I nearly cancelled my second interview with my current employer because after taking the 1.4 mile drive from their office to the Concord BART station to scope out the potential commute, I was scared of riding my bike along those streets. During that drive, I zipped down a few of their main streets such as Willow Pass Road, Clayton Road, Galindo Street, and Concord Avenue. Dear god, I thought, riding those streets on a bike would be suicide. There were no bike lanes. No shoulders to ride on the side of the road, and all the cars and trucks on those main streets were motoring. In most suburbs it is clear who the roads were paved for, but in towns like Concord it is abundantly clear. Along that drive to and from the office to the Concord BART station, as well as the drive off the highway to the office, I saw few pedestrians and no cyclists on the roads. I saw one or two guys riding their bicycles, but they were pedaling on the sidewalks, which was completely understandable. (Ultimately, I rode my bike to the second interview after I found a route to the office that avoided—for the most part—the main streets.)

In writing up this post, I googled “Concord” and “not bike friendly” out of curiosity. Amongst the top 10 hits were two articles on an accident back in 2012 that killed a father and one of his daughters while they cycled on the sidewalk of one of Concord’s main thoroughfares. The New York Times even wrote an article about it. In the April 2012 article, they stated that Concord—the largest city in Contra Costa County—had “less than three miles of painted, on-street bike lanes” at that time. That article was written two years ago but I’m willing to wager, backed by what I’ve seen on Google Maps, that the number of miles of on-street bike lanes is still about the same. During these past few weeks I’ve run some errands around Concord for work, and moseyed around some of the strip malls in the vicinity of my office and I have yet to see anything resembling a bike lane, or even sharrows. By comparison, Pittsburg—Concord’s municipal neighbor with a population of 63,264 (2010 U.S. Census) and 17.218 square miles—had 35 miles of on-street bike lanes in April 2012. With a total land area of 30.5 square miles, Concord is nearly double the size of Pittsburg, a suburb which, by the way, is not renowned as a cycling haven.

As a motorist, Concord seems to be a bit of a pain, too, especially if you’re driving along one of the many side streets and attempting to either cross the main street or make a left onto it. If that is the case, be prepared to twiddle your fingers on the steering wheel for a quite a while because those signals are poorly timed for saps like you. From my limited experience, it doesn’t seem to matter what time of day it is: commute time or early afternoon, those signals are timed to always give significant preference to motorists riding along the city’s main arteries; streets like Galindo, Willow Pass, or Concord Avenue. If you’re driving on those streets, that town was built for you, buddy boy, but if you’re a motorist, or a cyclist, or god help you a pedestrian trying to cross those busy thoroughfares, you will have to wait and wait for your opportunity—and once it’s your turn, the signals will give you little time to accomplish it. To help illustrate this, my 1.5 mile bicycle ride from the office to the train station takes about 12 minutes on average. Sometimes, I shit you not, I’d say about half of that time is spent simply waiting at a crosswalk or a signal so I can cross a main street. They’re the worst timed lights I’ve ever seen. Even in Fremont it’s not as bad. On their heavily-trafficked streets the signals are only poorly timed—and understandably so—during commute time to give preference to its motorists, not the whole fucking day.

All this begs the question: just who are the planners at the City of Concord? Have they ever taken public transportation? Have they ever had to take a bus in their lives? Do they believe bicycles are contraptions that should only be ridden for recreation along parks and trails such as the Iron Horse Regional Trail? (From what I’ve been told, it’s a beautiful 55-mile trail that runs from Livermore to North Concord, passing through cities like Concord and Pleasant Hill.) Do they think car-centric American suburbs are healthier for humans than walkable cities with infrastructures conducive to riding bicycles or public transportation like the ones littered throughout Europe, our civic forefathers?

I wish all the current and past city planners for the City of Concord were given missions, such as:

-Take an enjoyable stroll along the entirety of Clayton Street!, or
-Ride a bicycle, somehow or another, from the corner of Diamond Boulevard & Concord Avenue to the TJ Maxx on the corner of Clayton and Bailey Road; or
-Walk or take public transportation from Highlands Park to Sun Valley Mall.

I can’t help but think that if the knuckleheads who designed Concord attempted to traverse their human-made landscape by a means other than a motor vehicle they’d quickly and viscerally understand just how dehumanizing and wretched their civic constructs are. They would see how antithetical their planning is toward building anything resembling a healthy community. And better yet, I hope those short-sighted idiots with their fancy planning degrees will be there in 30-50 years when those suburban streets are barren, bereft of vehicular traffic, with abandoned gas stations and rusting cars littering the landscape they helped to create.