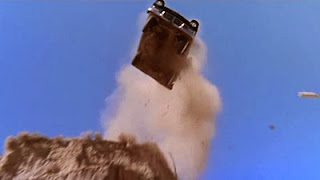 Two weeks ago, Justin and I picked our Top 10 album opening songs. Quite understandably, we followed by turning our sights to our favorite album closers.

As Justin pointed out in his list of favorite album closing songs, closers tend to be longer, more experimental, and also sadder—oftentimes downright devastating in their depressing prowess, which is why I got a real kick out of drawing up this list. When it comes to art, I’ve always been drawn to depressing, fucked-up material, so, of course, my list is teeming with wrist-slashers and epic songs. (You’ve been warned.)

For me, a great album-closing song is one that is so powerful, so definitive in punctuation that you couldn’t imagine any song following it; that’s my ultimate litmus.

Honorable Mentions:
• “A Day in the Life” from The Beatle’s Sgt. Pepper's Lonely Hearts Club Band (What a perfect closing song to such a classic album. I kept this one off my list only because Justin had it on his.)
• “Glory Box” from Portishead’s debut album
• “Third Eye” from Tool’s Aenima
• “Now You’re Gonna Pay” from The Zodiac Killers’ Have a Blast (A fucking great album from a San Francisco punk rock band no one’s heard of. If you’re a Clash or Sex Pistols or Dead Kennedys fan, please don’t beat me up for not picking a closing song from one of their albums!)
• “Empire of Light” from Tin Hat Trio’s Book of Silk (Book of Silk was written after frontman Mark Orton’s wife died at a young age. One of the more depressing, melancholy albums I’ve ever heard and this song is just absolutely heartbreaking and beautiful.)

10) The Ostrich from Steppenwolf’s debut album


I suspect most people haven’t heard this song, (am I trying to be hipster-like with this pick?) but it’s a devastating song that is still prescient. Before I paste the lyrics to illustrate, it’s more than worthwhile to mention that this song was written in 1968.

The water's getting hard to drink
We've mangled up the countryside
The air will choke you when you breathe
We're all committing suicide
But it's alright
It's progress, folks, keep pushin' till your body rots
We’ll strip the earth of all its green
And then divide her into parking lots

Nearly fifty years later, most of humanity is still sticking their heads into the sand, pretending that all is grand, and hoping that everything will turn out okay. As a species, we’re all still committing mass suicide.

9) When the Music’s Over from The Doors Strange Days
I’ve written about The Doors before on this blog, but those boys sure knew how to close out an album! Their debut album came to a close with “The End”—which could easily have made this list (it made Justin’s); Waiting for the Sun ended with “Five to One,” and “Riders on the Storm” closed L.A. Woman. Lately, “When the Music’s Over” has been my favorite of those closers. Clocking in at 10:57 in duration, it’s a certifiable epic. And like my favorite closing songs, it easily passes that litmus of there’s-no-way-another-song-could-possibly-follow-it. After Jimbo roars, Robby Krieger, Ray Manzarek, and John Densmore go apeshit-wild from 2:54-3:42 before settling into a calm which meanders and crests again after the 8-minute mark.

I’m no rock historian, but I doubt any other band in rock ‘n’ roll was cranking out songs like “The End” or “When the Music’s Over” back then. With their eclectic musical influences meshing into one cohesive unit, there really hasn’t been a band like The Doors since.


Like The Doors, Portishead has a knack for writing superb closing songs. “Glory Box” from their debut album is an immaculately gorgeous and heavy song; like that song, Beth Gibbons’ lyrics for “Threads” are so succinct and clear (I'm worn/tired of my mind/I'm worn out/thinking of why I'm always so unsure) that it gives her emoting—the anguish, the anger—that much more punch in front of the eerie sonic backdrop. This song can hit like a mallet.

7) A Light in the Black from Rainbow’s Rainbow Rising


A few weeks ago, Dio’s Facebook page asked fans who was their favorite guitarist who paired with Ronnie James Dio. Though he sung alongside some outstanding guitarists, for me it’s a no-brainer: Ritchie Blackmore, because of songs like “A Light in the Black.”

At 8:12 in length, this song is yet another epic on my list. I would have had this as second on my list if it were “Stargazer,” the song that precedes “A Light in the Black” on Rainbow Rising, which I think is a bit mightier. As far as musical and emotional power, I think either song could have been a potent closer for the classic album, but since this is the one that bring downs the curtain, this is my pick.

6) Raining Blood from Slayer’s Reign in Blood
If “Threads” can pack the punch of a mallet, Slayer’s “Raining Blood” is like a merciless shelling of speed and power. How fucking bad is this song? A few months ago, I read Joel McIver’s The 100 Greatest Metal Guitarists and Vader’s lead guitarist, Piotr Wiwczarek, came in at #68. According to McIver, his defining moment as a bad-ass shredder is Vader’s impeccable cover of “Raining Blood.” That’s how bad that song—played at an average of 210 beats per minute—is. Any thrash metal band that can pull it off is a force of nature. And I can’t imagine any other song on Reign in Blood closing out that classic album.

5) Street Spirit from Radiohead’s The Bends


I rarely ever listen to this album, and this song, along with “Fake Plastic Trees,” is one I have to be in a rare, rare mood to listen to. I don’t think I could listen to this song with another person in the same room without tearing up; I would feel way too naked.

“Street Spirit” is one of the most beautiful songs I’ll ever listen to. How could words even begin to try to describe this song? As I listen to it now, all I keep thinking is how direct and pure of emotion it is. Few songs have so plainly captured and conveyed the pain and hope of being alive.

Mi hermanita, Carmen, was the one who introduced me to Radiohead, years ago. (She also got me into The Beatles, bless her.) Back in our late high school years, she used to play The Bends over and over in her bedroom. Once I gave this tune a good, heartfelt listen, I became convinced that Thom Yorke must be a fallen angel. I’m still convinced he might be.

It could be argued that there was Rock ‘N’ Roll B.J. (Before Jimi), and Rock ‘N’ Roll After Jimi. Only a few songs need to be played as examples and evidence to support this argument: “All Along the Watchtower,” “Purple Haze,” “House Burning Down,” and “Voodoo Chile” come to mind for me, but, like Justin wrote in his list, this is arguably Hendrix’s “most impressive instrumental accomplishment.”

Let’s put it this way: if an alien crash-landed to earth and asked, “What was the deal with this Jimi Hendrix dude?” this is perhaps the one single song that you would need to play to best answer that question. Jimi’s wah-wah guitar playing doesn’t feel like it was of the earth; it doesn’t even feel like it was of the sun (if that makes any sense). His playing on “Voodoo Chile” feels like it was distilled and born screaming from the wildest hallucinogenic drugs that populate this planet.

On a related note, Bill Hicks hypothesized that God left marijuana and psilocybin mushrooms on our planet to accelerate our evolution. Jimi was tapped into those goodies, and subsequently evolved our music possibilities.

(If this isn’t an advertisement for doing hallucinogenic drugs, I don’t know what is.)

3) In the Backseat from Arcade Fire’s Funeral

We’re getting thick with wrist-slashers now. Can you sense it?

Like The Bends, Funeral is an album whose songs hardly ever make my rotation nowadays. (“Haiti” has been my favorite tune from the album the past few years because it’s so darn twinkly and pretty. How could anything bad ever happen while listening to that song!?) “In the Backseat” is a song that still rattles me pretty much every time I listen to it. It’s just so fucking gorgeous: the strings, the simple melody, but most especially Régine Chassagne’s voice. And the build-up of strings and drums to the electric guitars at the 2:37 mark: fuck. Even though I’ve heard the song enough times to know what’s coming, that part stills get me charged. And Chassagne’s wailing before the song’s outro still shakes me up with its raw emotion and power.


“Paper Boats” is a piercingly beautiful song. Another tune I can’t listen to in front of another person without feeling shook up and completely naked. The chorus: All I am is a body floating downwind—dear god, just fucking perfect; the singular essence of every human being’s trajectory summed up in eight words—and so gorgeously with the simple, lilting musical backdrop. What a way to close out this amazing album.

1) The Call of Ktulu from Metallica’s Ride the Lightning

So if you’ve read my blog before, you’ve probably already figured out how much I love Metallica. I think “The Call of Ktulu” is always going to be one of my favorites. Its eight minutes and fifty-four seconds of sheer instrumental ecstasy for me.

The late and classically trained Cliff Burton (along with Rachel Maddow, the best thing to ever come out of Castro Valley!) and Dave Mustaine left their undeniable marks on this track, which is truly like classical meets metal. For me, songs like “The Call of Ktulu” is what ultimately separates Metallica from other metal giants like Slayer, Megadeth, and Anthrax; Metallica had a broader musical and emotive range than the other members of thrash metal’s Big Four.

Fifteen years after it closed out Ride the Lightning, “The Call of Ktulu” got the classical treatment through Metallica’s collaboration with The San Francisco Symphony for their 1999 S&M album. Though the album—in my humble opinion—is hit or miss, mostly due to Hetfield’s vocals, their classical treatment of this song is simply astounding. If I was on my death bed and had ten minutes to listen to music blasted through speakers (I’m thinking of that final scene in Stanley Kubrick’s A Clockwork Orange), either version of “The Call of Ktulu” would be a dandy way to blast off Planet Earth.

Email ThisBlogThis!Share to TwitterShare to FacebookShare to Pinterest
Labels: Aenima, Have a Blast, House Burning Down, Let Go, Paper Boats, Reign in Blood, The Call of Ktulu, The Zodiac Killers, Tin Hat Trio

Self (or What Would a Buddhist Think?)