My Top 5 Most Hated NBA Players

With a title and premise like this, it’s unnecessary to write an introduction. I’m just gonna let my hate flow. 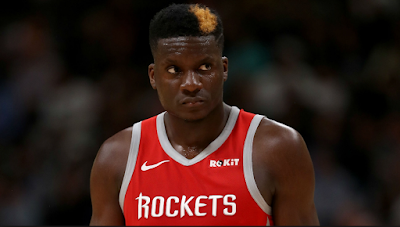 Okay, so before I plunge deep into this list, let me be clear about one commonality with each player on this list: the better they are, the more likely I hate them. Take Clint Capela, who used to be a late-round nobody drafted by the Rockets. Early in his career, I didn’t dislike him. I had no reason to. In fact, I kind of liked him because I delighted in laughing at him when he would snatch an offensive rebound against my beloved Warriors, miss the putback, and then inevitably brick the subsequent free throws when he shot less than 40% from the charity line.

But he’s gotten better over the years. A lot better. Earlier this season, his stats looked like All-Star material. But I can’t stand Capela because he’s basically a volleyball player playing basketball. On offense, his only two talents are crashing the offensive boards with his size and length and rolling or hanging around the basket for alley-oops. Capela is basically an oversized pogo stick with long arms adept at grabbing a ball in mid-air and throwing it through a hoop when it is spoonfed to him by players who have honed far superior basketball skills than him. As a 5’8 has-been with average athletic ability at best, I find it deplorable to watch a player like Capela with his uncanny combination of size, strength, agility, and speed excel at a simplistic skill that is akin to the soaring slam dunks I can throw down on my toddler’s goddamn fucking toy basketball hoop.

And one last note on Capela: it looks like he got shit on by a pigeon with a nacho cheese diet. It’s a bad look, guy. Bad look. Makes you look stupid. (Oh wait, you probably are.)


I liked Chris Paul back when he was a clutch playmaker willing an overmatched New Orleans Hornets team to playoff victories, but I’ve hated this motherfucker ever since he joined the Clippers. Although I’ve never personally met him, he strikes me as an arrogant prick. The Lob City Clippers were a splendid team to hate because they carried themselves with such a palpable sense of superiority and entitlement even though those dickbags never won a fucking thing; Chris Paul seemed to be at the very center of that. Although the man known as CP3 will deservingly go down as one of the greatest point guards of all-time, his gruff, general-like command of a game sucks the joy out of a basketball game like a hardwood black hole—and now he’s teamed up with The Human Cheap Code to incessantly whine at refs when their passion for flopping doesn’t result in free throws.

I deeply respect Paul as a fierce, gritty, and wily competitor of the highest degree, but I can’t stand him. I can’t stand any player who holds himself with such a sense of entitlement. 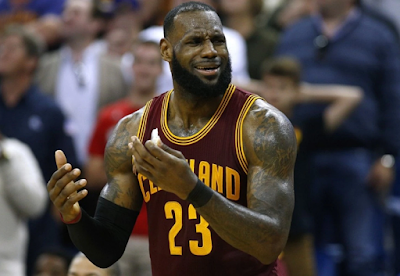 Speaking of entitled divas, here’s LeBron James on cue for my list.

Until the past two seasons, LeBron was at the apex of my list of most hated players—and for good reason; he was the unquestioned leader of the team that was the Warriors greatest rival. And, in front of reporters and cameras, he has viscerally bent over and sucked his own dick when he said (in the 2015 NBA Finals): “I’m the best player in the world.” (which was true at the time), or, late last year when he reflected on the improbable 2016 NBA Finals victory when he said, “That one right there made me the greatest player of all time.” I just can’t stand people—let alone athletes—with such titanic hubris. I’ve always admired superstars who held themselves in a more humble fashion. (I see you, Barry Sanders!)

Here in the San Francisco Bay Area, LeBron’s (a.k.a. LeQueen) 2016 Halloween party with all its petty references to the Warriors’ Final’s collapse is the stuff of legend. And now look at how he has helped to further ruin the Los Angeles Lakers franchise. In terms of NBA vulture capitalists, LeBron has no peer. He sucked what he needed out of the Miami Heat franchise and left for Cleveland once he concluded he had a better chance to win championships there, and then once their salary cap got fucked by signing role players he demanded for his team to big-time contracts (I see you, J.R. Smith and Tristan Thompson), the self-anointed king said, peace, I’m out, and bailed for the Lakers. Even his letter announcing his return to Ohio was drenched with the kind of hallowed, inflated self-importance that is bred within a once-in-a-generation basketball phenom who has basically gotten whatever he has wanted since he was a teenager.

LeBron’s eight straight trips to the Finals is impressive. It’s a marathon-like achievement, but after moving to the Western Conference for one measly season and failing to lead his team to the playoffs, I’ve got to admit, that made me very, very happy. Despite his gaudy career stats, this self-absorbed motherfucker will never touch Jordan’s superior greatness. (And to that debate all I gotta say for checkmate is: Michael Jordan would have never fucking allowed a 32-year-old role player like Jason Terry outplay him in a playoff series, let alone in the fucking NBA Finals!—and let alone when LeBron was in his physical prime.)

(After LeBron, there's a pretty steep difference for me in degree of hatred for my top 2 guys of 2019.) 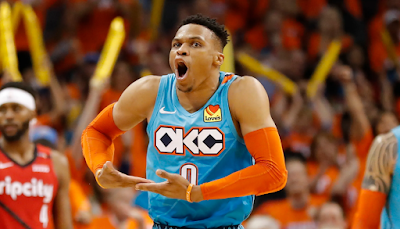 Russ—as I prefer to call him—has steadily risen up this list ever since Kevin Durant left the Thunder because it has afforded him ample opportunities to demonstrate his teenage-level of maturity. I used to love Westbrook’s game. I still partly respect it. Russ is the Ultimate Warrior of the National Basketball Association—running into the ring at full speed, pure energy incarnate as though he’s tugging on the ropes like he was struck by a thunderbolt from Zeus himself. And the analogy doesn’t stop there. When I was a kid—an aesthetic simpleton, basically—I loved the Ultimate Warrior. But as an adult, I’m slightly embarrassed for my past love of the Warrior. His game inside the ring largely consisted of him running into the ropes, clotheslining his opponent left and right, then peppering in an occasional body slam followed by a gorilla-like thumping of his chest before he would finish his opponent with the Gorilla Press. The Warrior had little actual wrestling skill. He was all flash, muscles, and brute strength.

For me, Westbrook is analogous on the hardwood floor. Since he entered the league, I don’t feel like he’s vastly improved his game; sure, he’s refined his ability to pad his stat sheet with rebounds and assists, but I don’t think he truly makes his supporting cast better like true great players of this game, like Larry Bird, Magic Johnson, or LeBron James. And here’s what I truly loathe about Westbrook: he’s one of the most physically talented basketball players we will ever see. His explosive first step, elite speed, his astounding leaping ability. Russell Westbrook is a fucking force of nature—but he’s a dumb player. Never consistently figured out how to read a defense. Never developed his mind to conquer this game when he had every physical gift to. Since he came into the NBA, he’s only known how to go full-raging-often-out-of-control speed to the rim with average to below-average finishing at the cup, despite all his remarkable physical ability. And his “Next question” responses to members of his hometown media is downright immature. Childish. Believe it or not, Westbrook is thirty years of age, a father of three children, but he comports himself in postgame interviews with the maturity of a second-rate JV high school player.

No wonder the Thunder will never fucking win a championship as long as this dumbshit bully is their 1st or 2nd best player. And mark my words, they never will as long as he’s pulling his dumbshit act.


Although The Beard is not nearly as obnoxious as Russell Westbrook in my book, the main reason this fool tops my list is because of the way he plays the game. If every NBA team had a player who offensively played like Harden, I would not watch basketball. Like most non-Rockets basketball fans, I think James Harden masterfully exploits the rules like few players before him to earn a parade of cheap foul shots. Harden is like that motherfucker down at the arcade (in the olden days) who mastered how to use Ryu or Ken in Street Fighter II to throw a never-ending stream of fireballs which was impenetrably defended with a Dragon Punch. It was a ruthless, efficient game strategy much like Harden’s endless amount of dribbling at the top of the circle that converts into either a drive to the basket, a step-back three, or rising up and initiating contact while making a shooting motion in order to earn a weak-ass foul shot opportunity. I’m not denying that he’s a great offensive player, but I feel like those fouls he initiates with the softest brush is an all-time lame way of scoring in this game.

To boot, the other thing that annoys me about Harden is how weak he is when another player dares to physically push back on him. Like LeQueen, Harden—who’s built like an H-back—has no trouble bulling into and pushing off on his opponents on his way to the basket, but the second this motherfucker gets flicked in his beard he gets all prissy or up in arms and whining for a call.

I just can’t stand this motherfucker. (To his credit, since his bullshit flopping antics in Game 1 of their 2019 playoff matchup with the Warriors, Harden has played the right way and he’s straight up balled.)

Kyrie Irving: I love his game—his handle (the league's best), the way he plays angles, his astounding tough-shot making, but he’s so fucking goddamn egotistical it’s disgusting to listen to many of his interviews. This motherfucker talks and holds himself like Kobe (a five-time champion) when his major career accomplishment thus far consists of playing a lethal Robin to LeBron’s Batman in the 2016 Finals.
Posted by Juan at 1:15 PM

Email ThisBlogThis!Share to TwitterShare to FacebookShare to Pinterest
Labels: most hated NBA players