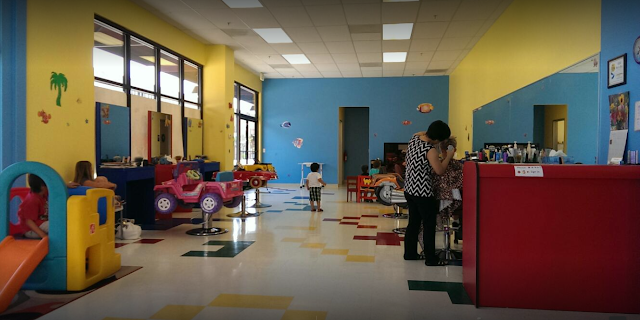 Today we took you to your third haircut ever. Per your mom’s firm advice, your abuelita and I tag-teamed this effort. After taking you to your first two haircuts, your mama had her fill and said uh, uh, next time it’s your turn to take him.

We took you to Little Scissors, the kids hair salon at the Fremont Hub. (Your mom refers to their hair stylists as “haircut ninjas.”) For the past few weeks your hair has grown increasingly long. You’ve needed a trim for some time, but I’ve been hesitant to take you to the salon because I didn’t want to subject the hair stylists to your wails and cries.

Once we parked, you and I walked hand and hand all the way to the salon. Thus far, it’s the longest we have walked hand in hand together. I had a big smile inside, a faint one on the outside. I know someday you will be older and bigger and won’t want to hold my hand.

As we approached the salon, I told your abuelita that I wondered if you would try to bolt once you realized where we were taking you. But you didn’t. We stepped into the salon and stepped over to the mini playground by the entrance. I was surprised. I’ve seen your memory in action. You will cry shortly after we set foot in an examination room because you undoubtedly remember what goes down in there. I figured you would react similarly at the salon. 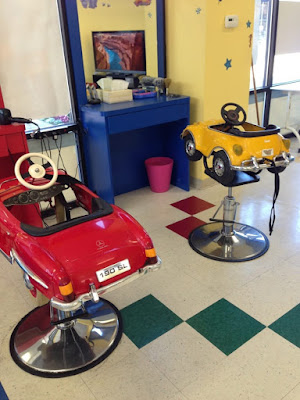 We stepped in minutes after they opened. And so, we had our choice of toy cars doubling as kiddie barber chairs to strap you in—a pink corvette that looked like Barbie’s favorite ride, a classic-looking red car. Instead, we carried you to the tiny yellow roadster closest to the big screen TV at the back of the salon; the hair stylist, Jennifer—a petite Asian woman in her fifties—thought it might be helpful to have you watch the cartoon movie screening. Although it was my first time at the salon with you, I knew this tactic would be futile. And it was. You began to squirm and cry and stretch your teeny legs outward when we tried to seat you in the miniature roadster as though we were trying to drop you in a bottomless well.

Tu abuelita held you while we forced you into seated position. After we strapped you in the toy roadster, Jennifer said, “Do you want to get him a lollipop from the front?” That sounded like a good idea. After all, she was the one versed in children’s’ haircuts, so I scurried to the register to nab one. I unwrapped it and offered it to you but you were crying so hard that you were unable to pay attention to what I was offering you.

Jennifer started with the clipper. A #4 cut on the bottom. Oh man did you cry. Like we were torturing you. Tu abuelita clutched you like she was grabbing a light post in the middle of a hurricane. I bent over to try to distract you with an inane lullaby, but, with all the wailing and commotion, I couldn’t recall the lyrics to the “Over the Deep Blue Sea” song about pirates we had been recently crushing on.

“Can you play a video from your phone?” Jennifer asked, her voice raised over your crying.

“I don’t think it’s going to work,” I said, shaking my head. Your mom had told me that at your last haircut you didn’t even pay attention to the cartoon videos we occasionally play for you on our phones, videos that typically mesmerize you, videos that capture your complete and undivided attention.

But since I play nice, I whipped out my phone. I opened my YouTube app as quickly as possible. I played one of the first videos that popped up: the Halloween-themed version of Baby Shark.


To my surprise, once Jennifer stopped using the clipper, you chilled out a bit. You actually ceased crying. In fact, you were so calm that Jennifer was able to tactically snip the hair on top of your head with her scissors.

But before long, you began to cry again. She turned back to the clipper. Cue your discomfort and crying. She bent your earlobes to buzz off the long strands of hair sprouting around your ears.

And then Jennifer was done. Tu abuelita remarked at how much better she did compared to your previous haircut. You stopped crying. I smiled with relief.

“Are we your first customers today?” I triumphantly asked Jennifer.

“Oh, bless you for you doing this work.”

Tu abuelita carried you out of the chair in her arms. I gave Jennifer a big tip and thanked her. You rested your head on your abuelita’s shoulder as we left the salon. You dramatically sniffled back a few tears. The sun shone brightly. You had survived the cosmetic ordeal.

“Maybe we should let him walk it off?” I said to your abuelita in Spanish.

She slowly bent over to put you down, but you wouldn’t let her go. We continued back to the car. Along the way, we passed a stray shopping cart.

“Maybe we can put him in so I can push him around?” I suggested. “He loves that.”

Tu abuelita lifted you over the kid’s seat of the shopping cart. But you wouldn’t let go of her.

“He just wants to be held,” your abuelita said.

I grinned as I stared at you—your eyes watery and red from crying.

On the drive back home, I rode beside you in the back seat. You quietly held your toy ice cream truck as its lights flashed. By then, you were done sniffling. At your previous haircut, your mom told me you continued to sniffle an hour after you had left the salon.

I could see that for your next haircut you would be a little more grown up. You might even be talking by then. I could see that in short time a trip to the kiddie hair salon won’t trigger a sobbing fit.

You’re growing up so quick. 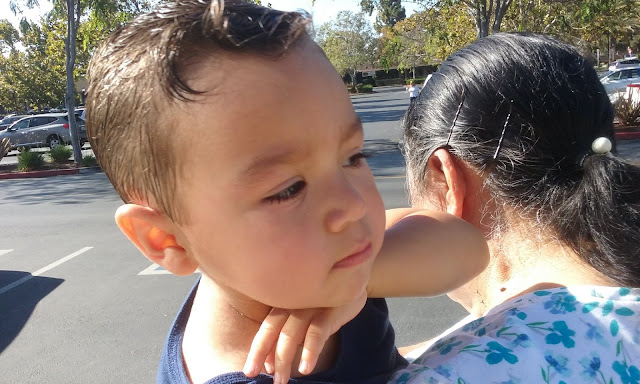