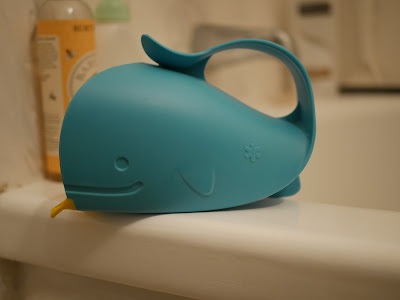 Since he’s nearly twenty-one months old and almost three feet in height, Miguelito recently outgrew his plastic baby tub. He has graduated to our adult-sized bathtub. Compared to his baby tub, we use a large amount of water for his baths now. This has bugged me and Maria a little since we live in drought-prone California. So tonight, after we bathed Miguelito, when I was about to unplug the tub to drain the tepid water, I realized I could reuse the bath water. I had not showered this morning and thus due for one, and Miguelito had not peed during the bath (yay!) I feel a little weird and embarrassed to admit how excited I was to essentially recycle that water, but I was. To boot, it had been years—probably over a decade—since I had taken anything resembling a proper bath à la Dude.

With Maria’s go-ahead, I whipped off my clothes and slipped into the bathtub while she dried and cleaned and clothed our son. I pulled back the shower curtain and took a seat in the inch-high water. The blue whale-shaped bath rinser we use to bath Miguelito was floating in the water. I grabbed it and poured water all over my body. I giggled to myself. Miguelito likes to meditatively use the bath rinser to scoop up water and slowly pour it out, again and again and again, so it kind of made me feel like an overgrown baby to use it. But it worked quite effectively.

Soon after, Miguelito was clean as a clean whistle and dressed in his pajamas. Past the bathroom door, I could hear Maria let him loose. As I finished lathering my arms and legs with soap, I heard Miguelito open the bathroom door, then the pitter-patter of his feet. He pulled back the shower curtain as he has many times on me in the past few months. But this time, he didn’t look up at me and laugh with glee as I stood and showered. Instead, he found me at his eye level as he found me sitting in the tub where we had just bathed him. He furrowed his brow and gave me a what-the-fuck-are-you-doing!? look. I smirked. ¡Hola Miguelito!, I said, as I dipped his bath rinser into the water so I could pour the soap off of my other arm. He studied me as I went about my business. And before long, he was grinning. A look of understanding flashed over his face. Since he’s not talking much (thus far), I will never know with certitude what he was thinking at that moment, but I think he figured it out—that I was bathing, just like him. That I’m just an overgrown kid.
Posted by Juan at 10:51 PM